The investment would more than triple Dow’s ethylene and PE capacity from its Fort Saskatchewan site while retrofitting the entire site to net-zero scope 1 and 2 carbon dioxide emissions. 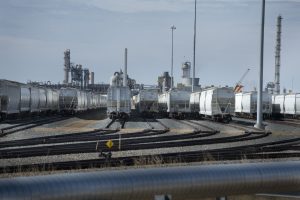 In an Oct. 6 news release, Dow officials said the project would more than triple the ethylene and polyethylene (PE) capacity from its Fort Saskatchewan site, while retrofitting the site’s existing assets to net-zero carbon emissions. “The organic, brownfield investment would significantly increase [our] capacity of advantaged ethylene, PE and derivatives manufactured across Alberta – all while maintaining [our] enterprise-level commitment to keep capital expenditures at or below depreciation and amortization (D&A) levels,” the company said.

The investment, which is subject to approval by Dow’s board of directors and various regulatory agencies, would decarbonize approximately 20 per cent of Dow’s global ethylene capacity while growing polyethylene supply by about 15 per cent and supporting approximately US$1 billion of EBITDA growth across the value chain by 2030. Further, Dow estimates that the project can be completed with an approximately 15 per cent lower capital intensity than Dow’s Texas-9 cracker and derivative units.

“This investment builds on Dow’s strong leadership position and allows us to meet the increasing needs of customers and brand owners seeking to lower the carbon footprint of their products,” said Dow chairman and CEO Jim Fitterling. “Our advantaged position and disciplined approach to capital investment makes us well positioned to lead the industry in decarbonizing, growing and accelerating Dow’s path toward carbon neutrality.”

The project would build on Dow’s previous success in reducing the carbon emissions intensity of its manufacturing fleet. Texas-9 in Freeport, Texas, Dow’s most recently commissioned cracker, has delivered a greater than 15 per cent return on invested capital since startup and currently operates at 65 per cent lower conversion cost and up to 60 per cent lower carbon dioxide emissions intensity than the average cracker in Dow’s fleet as well as 20 per cent lower capital cost versus the industry. “The asset leverages best-in-class technology, including a highly efficient furnace design with optimized integration with other facilities on site, that significantly reduces energy consumption and carbon dioxide emissions,” Dow said.

The production process at Fort Saskatchewan will convert cracker off-gas into hydrogen as a clean fuel to be used in the production process, and carbon dioxide that would be captured onsite to be transported and stored by adjacent third-party CO2 infrastructure.

“Today’s announcement from Dow is fantastic news for Alberta’s economy. If this project proceeds, it could represent one of the largest job-creating investments in Alberta in over a decade,” said Jason Kenney, Premier of Alberta. “By choosing Alberta to host the world’s first net-zero carbon emissions ethylene plant, Dow is highlighting our growing global leadership in emissions-reducing technology like carbon capture utilization and storage, and Alberta’s open for business policies.”

“Alberta’s support for circular hydrogen and CO2 infrastructure are essential to enabling us to develop this net-zero carbon emissions manufacturing facility,” said Fitterling. “Canada’s support for this type of investment can serve as a model for how government investment can encourage the development and accelerate adoption of emissions-avoiding technologies and solutions.”