The recently-launched Great Lakes Plastic Cleanup Initiative is tackling plastic pollution in the Great Lakes with the largest deployment of Seabin and LittaTrap technology in the world. 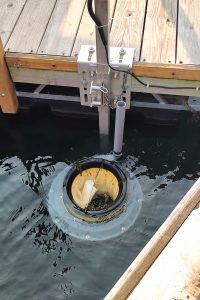 A Seabin in the water. Photo Credit: Nova Chemicals Corp.

Launched on August 27, 2020, the GLPC aims to combine innovative capture and clean-up technologies to remove plastics from the Great Lakes with messaging to communities and consumers (with an initial focus on Ontario) about the importance of reducing, reusing, and recycling material waste.

The GLPC uses Seabin and LittaTrap cleanup and capture technology – Seabin employs “trash skimmers” designed to be installed in the water of marinas, yacht clubs, ports and any water body with a calm environment and suitable services available; and Litta Traps are catch basins that sit inside stormwater drains to prevent trash and other debris carried by stormwater from entering waterways.

In a statement, Calgary-based Nova said that its sponsorship will help bring two more Ontario marinas – Andrew S. Brandt Marina at Sarnia Bay and Bridgeview Marina from the Sarnia-Lambton area – into the GLPC Initiative, bringing the total number of marinas participating to date to 13.

The Great Lakes suffer from high levels of plastic pollution – in some locations, concentrations of plastic in the lakes are greater even than those recorded in ocean garbage patches. Shoreline cleanups show that plastic accounts for around 80 per cent of the litter found on Great Lakes shorelines. It’s estimated that approximately 10,000 tonnes of plastic enters the lakes and their surrounding waterways each year from Canada and the U.S.

As part of the GLPC, being implemented over the next five years, Seabin and LittaTrap capture technologies will collect debris throughout the spring, summer and fall months. The debris will be analyzed, and both marina-specific and aggregate results will be profiled on the GLPC website in order to further our understanding of the plastic pollution problem throughout the Great Lakes and what can be done by government, industry and citizens to prevent plastic from reaching the lakes in the future.

“Plastics play a vital role in society as they promote health and wellbeing, but they do not belong in the environment,” Nova president and CEO Luis Sierra said in the statement. “Through initiatives like this, as well as our investments in advanced recycling technology, bringing post-consumer recyclate to market and encouraging use of recycled plastic in packaging design, we remain committed to building the circular economy solution.”

The GLPC initiative was founded by the Council of the Great Lakes Region, Pollution Probe, Boating Ontario, the University of Toronto Trash Team, and PortsToronto with funding from government and corporate partners