The Ningbo, China-based injection press maker said its 2021 sales were a 35.7 per cent increase over its 2020 results. 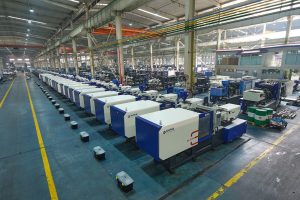 In a March 24 statement, Haitian officials said that total machine sales exceeded 56,000 units for the year, an all-time high for the company. For the first time ever, they said, the company reached annual exports of more than 10,000 units, with total overseas sales reaching US$775 million, which represents a 40.1 per cent increase over 2020.

The company’s Mars series injection molding machine – which officials called Haitian’s “main product” – reached US$1.7 billion in sales for the year, a year-on-year increase of 33.2 per cent. Its Zhafir all-electric series saw 44.3 per cent year-on-year sales growth for a value of US$326 million, meanwhile, while its two-platen Jupiter series rose to about US$317 million, which represents a 54.8 per cent increase.

Looking ahead, Haitian said it will open a second headquarters in Shunde, South China, which is expected to begin trial production in the second half of this year. “The Shunde site is on schedule to be in the first phase and is expected to start trial production in the second half of 2022,” the company said. “At the same time, [we] will continue to strengthen [our] global footprint.” Haitian said it will continue to develop overseas regional headquarters and expand overseas assembly and trade-oriented factories into integrated regional centres that combine research and development, manufacturing, assembly, application, sales and service to localize production worldwide.

Absolute Haitian, based in Worcester, Mass., is the exclusive sales and service partner in the U.S. and Canada for Haitian International.