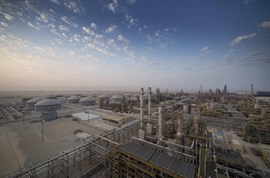 Ineos signs an agreement with Saudi Aramco and Total to build its first ever plants in the Middle East.

British chemical supplier Ineos has signed a memorandum of understanding with Saudi Aramco and Total SA to build its first ever plants in the Middle East.

In a statement, Ineos said the three new world-scale specialty chemicals plants will produce the key building blocks for carbon fibre, engineering polymers, and synthetic lubricants that are “pivotal” to economic growth in the region. The plants will be built at the Jubail 2 complex, and represent an investment of $2 billion.

Ineos will build a “state-of-the-art” 425 kilotonne per year (ktpa) acrylonitrile plant, using its homegrown technology and catalyst systems. The unit, claimed to be the first of its kind in the Middle East, is set for start-up in 2025.

The company will also build a 400ktpa linear alpha olefin plant and an associated poly alpha olefin unit, scheduled to begin production in 2025.

“Global demand for acrylonitrile continues to grow ahead of GDP, to meet the demand for lighter, stronger, energy efficient materials such as ABS, composites and carbon fiber,” Paul Overment. CEO of Ineos Nitriles, said in the statement.

The location of the units in Saudi Arabia will provide Ineos access to competitive raw materials and energy, the company said, as well as enabling it to better serve customers directly in the Middle East and markets across Asia.

“This is a major milestone for Ineos that marks our first investment in the Middle East,” Ineos chairman Jim Ratcliffe said in the statement. “The timing is right for us to enter this significant agreement in Saudi Arabia with Saudi Aramco and Total. We are bringing advanced downstream technology which will add value and create further jobs in The Kingdom.”