As Bill Clinton could tell you, being tipped off to a problem before it happens can mean the difference between life and death. In 2004, doctors of the former U.S. president saved him from a looming — and possibly fatal — heart attack by performing pre-emptive surgery.

For plastics processors, machinery failure is a lot like a heart attack — but many continue to push their luck, operating processing machinery until it drops dead. It’s called “run-to-fail” and it’s the norm in umpteen factories — but if a start-up company specializing in “smart” predictive maintenance sensors and a cloud-connected mobile app has its way, it might soon be as dead as disco.

Launched last year, Prophecy Sensorlytics is a Columbia, Md.-based company that offers patented machine-mountable (using magnets or screws) sensors made out of a single silicon chip, as well as a patented wireless sensor network, a cloud-based distributed data management system, and analytics that monitor a variety of machine signals to help predict incipient failure and alert users to when maintenance is needed or should be scheduled. 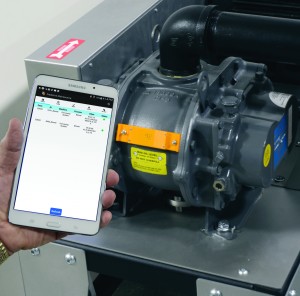 A yellow Prophecy sensor machine-mounted on a pump.

In the system developed by Prophecy, data from these machine-mounted devices is uploaded via a local wireless network created by radio frequency connected sensors. Using proprietary software, this data is then trended and analyzed to indicate if preventive maintenance is needed. The system will also send maintenance alarms to personnel in the form of emails and text messages. The data is visualized graphically, and classified to identify a particular maintenance problem so that personnel can quickly learn about it; any data point shown in red, for example, warrants immediate attention. By clicking on a red alarm, more detailed analysis logs are available on possible causes of the problem so that maintenance personnel don’t have to waste time figuring out what’s wrong. Moreover, any new failure can be logged in as fresh data, which helps the system identify trends and patterns, to enable it to continuously “learn” when a machine is properly functioning and when it isn’t.

“We have developed a complete and cost-effective platform to bring the new era of the ‘internet of things’ to mid-sized manufacturers — which traditionally can’t afford expensive sensors and sensor networks — for predicting machine failures and getting the initial trend of a fatigued machine to mobile apps,” said Dr. Biplab Pal, Prophecy’s co-founder and chief technology officer. “Most machines indicate pending failure in the form of rising or falling surface temperature, pressure, flow, vibration, sound, power factor, and so forth. Our machine-‘wearable’ sensors can be placed on old and new machines to track their gradual failure so that a complete disruption of production can be avoided by scheduled maintenance — knowing exactly where and when the machine is going to fail or cause trouble.”

Unveiled at the NPE2015 trade show in March, the technology is available through a licensing arrangement. Prophecy’s first licensee is Baltimore-based Novatec Inc., which has exclusive rights to the technology on drying, conveying, and downstream extrusion systems. Novatec systems will include the predictive maintenance technology at no extra cost, but the technology has the potential to be used on virtually any other type of equipment. On injection molding machines, for example, it could be applied not only to pumps, drives, and motors, but also to ensure platen parallelism; and with extruders, Prophecy technology can be used on gearboxes to monitor oil pressure and vibration, as well as motor temperature. “We are also looking to use vibration to measure changes in screw and barrel wear,” Pal said. “Other markets that we are working on in the future include motors for auxiliary equipment such as chillers.”

If it does indeed send “run-to-fail” to the scrap heap of history, the Prophecy technology will have changed everything. Bill Clinton would understand why.