Nanoplastics without additives, which are used in detergents and biocides, were the most toxic to both Atlantic and Guadeloupean oysters. 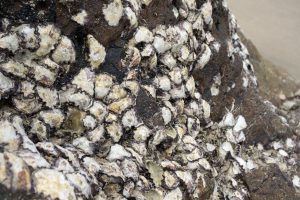 Natural oysters on a rock on a beach. Photo Credit: Adobe Stock/augustcindy

Our daily use of plastic products is having direct consequences on the health of animals. Roughly one per cent of plastic waste ends up in aquatic and terrestrial environments where it can have negative effects on wildlife.

Among these species are oysters, marine mollusks found in many places around the world — as well as on our dinner plates.

Earlier laboratory studies have shown that nanoplastics can have negative effects on the ability of Pacific oysters to reproduce. Recently, our research team looked at the individual and combined effects of nanoplastics and arsenic on oysters, and found these pollutants affected some of their most basic functions. We published the results in Chemosphere and Nanomaterials.

The Atlantic oyster is most affected

Nanoplastics are plastics measuring less than one thousandth of a millimetre across. They come largely from the degradation of plastic waste released into the environment, but they can also include plastic nanobeads contained in consumer products, like face scrubs, that find their way into natural environments.

These nanoplastics can accrue a variety of environmental contaminants on their surfaces. When an organism ingests the contaminated nanoplastic, the substance can separate from the plastic and accumulate in the organism’s tissues.

Arsenic, a toxic metal, was the most abundantly measured contaminant on the plastic debris our team collected on the beaches of Guadeloupe. Oysters easily accumulate metals through their diet.

We exposed oyster to an environmentally relevant concentration of arsenic. We measured high concentrations of arsenic in the exposed mollusks, and found higher levels in the gills of the Atlantic oyster Crassostrea virginica than in those of the oyster Isognomon alatus found in Guadeloupe.

These results are the first to highlight the difference in sensitivity of oyster species to arsenic.

We also wanted to test whether the combined exposure of nanoplastics and arsenic would increase the accumulation of this metal in mollusks. Fortunately, this was not the case. The bioaccumulation of arsenic did not increase with the presence of these nanoparticles.

Effects on the basic functions of oysters

Oysters are filter feeders that eat small bits of algae suspended in the water. We contaminated algae with three types of nanoplastics to test whether these would cause problems to their health.

The nanoplastics we studied were particles of synthetic carboxylated polystyrene with no additives, crushed particles of virgin polystyrene and soiled plastics. The latter were recovered from the beaches of Guadeloupe and then crushed.

Among these three types of plastics, nanoplastics without additives, which are used in detergents and biocides, were the most toxic to both Atlantic and Guadeloupean oysters. After we exposed the oysters to these plastics, the Atlantic oyster showed increases in the expression of genes associated with programmed cell death, as well as an increase in the number of mitochondria — the cell’s energy centres. The Guadeloupean oyster also showed changes in gene expression, but the response was less pronounced.

The combined exposure to nanoplastics and arsenic revealed contrasting effects between our two oyster species. For example, they reduced the individual effects previously seen on the expression of genes involved in the regulation of oxidative stress, a situation that creates a toxic environment in the cell. Yet their interaction also amplified certain effects, such as an increase in the production of mitochondria.

Researchers are increasingly using gene expression and other tools of molecular biology to understand the effects of environmental contaminants in animals. It is important to develop ultra-sensitive techniques that warn us, in real time, when a contaminant is affecting the health of ecosystems. We must not wait to reach concentrations of pollutants that would cause irreversible effects.

In the food web

The next step is to study how nanoplastics are moved into the food web.

Analytical tools are currently being developed to quantify the presence of nanoplastics in biological tissues. For example, “pyrolysis gas chromatography” is an analytical tool that can be used to identify a variety of polymers and contaminants in a sample.

It could be used in the future to help determine the amount of particulate matter found in farmed and wild oysters.