Terry Elliott has spent over 30 years in Canada’s plastics industry, rising from the chemistry lab to sales and management positions to his current job as president of Scepter, while doing enough volunteer work along the way to fill a second career. In both areas, he’s used his team management techniques and transformational leadership skills to improve organizational health – and the bottom line. But for all his strategizing, he didn’t see the Leader of the Year award coming. 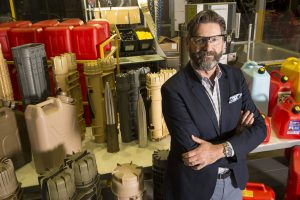 Success is all about prioritizing. Trump might get more done if he focused more on policy and less on twitter feuds. In the business world, meanwhile, muddled priorities can be even more damaging; as business management author Patrick Lencioni put it, “If everything is important, then nothing is.”

Terry Elliott couldn’t agree more. Throughout a 30-year career in Canada’s plastics sector that includes positions with Polysar Energy & Chemical Corp., Nova Chemicals Corp., and Ampacet Canada – as well as countless hours given over to volunteering with industry associations – Elliott has consistently prioritized team building and problem solving. And Elliott – a fan of Lencioni’s work – isn’t about to change now, in his newest role as president of Toronto blow molder and injection molder Scepter as that company charts a new course under new ownership.

Lencioni also stresses that teamwork is the ultimate competitive advantage. Which is another way of saying there`s no “I” in team. But for once, Elliott is going to have to deviate from the script: as the Canadian Plastics Industry Association’s Leader of the Year for 2017, the spotlight is now on him alone.

Canada’s plastics sector has been around for long enough that many of today’s most prominent and successful personages are second generation members – the offspring of distinguished names and company founders from the 1950s and 1960s. Elliott isn’t one of them: His father owned a convenience store in Woodstock, Ont. But he picked up some early and valuable business experience nonetheless. “As a teenager, I worked at the store in my spare time, so I became familiar with how to run a small business: scheduling the staff, making bank deposits, et cetera,” he said. This early entrepreneurial bent remained firmly in the background as Elliott graduated with a degree in chemistry from the University of Western Ontario in 1987, but became noticeable in his first job out of school. “I started with Polysar in Cambridge, Ont., working in the laboratory in the polystyrene division,” Elliott said. “Eventually, though, I became a technical sales representative and a troubleshooter at injection molding plants, which is where I first began meeting business leaders, product segment managers, and salespeople. It opened a doorway into some of the behind-the-scenes aspects of the business.” Elliott’s extracurricular work with plastics industry associations began during this period too; he signed on with CPIA’s Environment and Plastics Industry Council – or EPIC for short – around 1990, and joined the executive committee of the Plastic Film Manufacturers Association of Canada (PFMAC) in 2001.

During this same period, Polysar was acquired by Calgary-based Nova, and Elliott joined the Nova staff in Ontario. “I was a senior account manager with Nova’s polyethylene division and moved up through the ranks until I had the largest market segment sales territory in Canada, mainly selling speciality films and specialized in extrusion coating; and by 1996 I was a market segment specialist for films and coatings,” he said. “This gave me more exposure to entrepreneurs and business leaders, and I realized that I really loved business and the strategy of sales. Nova had a team-centric approach and I responded to it: I became a student of leadership during my mid-20s, and took courses at Ivey Business School at the University of Western Ontario and executive management programs at York University’s Schulich School of Business.”

In 1998, Elliott accepted a position as director of sales and marketing with colourant and additive maker Ampacet Canada – a division of Ampacet Corp. of Tarrytown, N.Y. – and was promoted to general manager nine years later and given his first full P&L responsibility. “Ampacet was a $700 million company when I joined, so it was large enough to be a good corporate environment but not so large that it was driven quarter-to-quarter by shareholder value,” he said. “We doubled the business during the first five years I was there, and when I became general manager I was also given a seat on the North American leadership team.” It was at this point that Elliott’s business philosophy – nurtured by personal experiences, university courses, and books by Lencioni and others – really started to pay off. “I wanted to change Ampacet’s culture and replicate the team-centric approach of Nova, so I brought in consultants that led us through a transformational leadership training program that focused on identifying and resolving conflicts.” What was the lesson that Elliott wanted driven home? “For a business to succeed, it has to be both smart and healthy,” he said. ”Being smart involves having good products, a good financial base, knowing the market well – all the traditional keys to success. But smart companies still fail, usually due to softer things like lack of clarity, or employees being pulled in different directions and then losing their focus and their motivation. Being smart and healthy is the model I pursued at Ampacet, by ensuring that our team spent considerable time together in meetings and working sessions, working through issues and solving problems with the team as a whole.”

Eliminating team dysfunction wasn’t Elliott`s only achievement at Ampacet, however. “I oversaw the approval of a multimillion dollar, 42,500-square-foot expansion to our production facility in Kitchener, Ont., which also added many new jobs and increased the plant’s production capacity,” Elliott said.

At which point Elliott came to a fork in the road. “Once the expansion was in place and we had reached the point where the leadership team functioned very well and could run the business on its own, my options were to do more of the same at Ampacet on a larger scale, or find something new,” Elliott said. “I’ve always believed that, while you can never truly master the role you`re in, you can reach the point where you lose your edge. I was afraid that might happen to me, so I was inclined to move on.”

As if on cue, Scepter came calling. Founded in 1949 by Evald Torokvei, Scepter had made a name for itself in the 1950s by blow molding jerry gas cans before expanding into extruded PVC pipe and fittings, as well as heavy calibre ammunition casings for the Canadian military. In the 1990s Scepter merged its pipe division with Canron’s to form IPEX, and over the next decade IPEX would become one of the world’s largest pipe and fitting manufacturers. By 2014, Scepter was the largest manufacturer of portable fuel containers in North America and the leader in portable OEM fuel containers for the marine industry, with locations in Toronto and Miami, Oklahoma. In June of that year, Scepter was acquired by Akron, Ohio-based Myers Industries Inc., a manufacturer of plastic and rubber products – and Myers was looking to make some big changes.

“When Myers contacted me in 2016, it was beginning to implement the so-called 80/20 rule at Scepter,” Elliott said. For the uninitiated, the 80/20 rule – also known as the Pareto principle – was originally popularized by Illinois Tool Works, and states that 20 per cent of a business’ customers are responsible for 80 per cent of its revenues; the goal, then, is to focus on what is most important – the 20 per cent of the items which account for 80 per cent of the value – and to spend less time and resources on the less important. “I`m a big believer in the 80/20 rule, so when Myers offered me a position at Scepter and the chance to help implement it, I was immediately interested,” Elliott said. “I enjoy defining a goal and getting a group of people to achieve it, which is what Myers wanted me to do with Scepter.”

Elliott started with Scepter in May 2016 and in the year-and-a-half since has helped the company take some real strides forward. “In accordance with 80/20, we`ve simplified product lines by reducing the number of products offered by combining the features of similar products and gradually eliminating low-value products while also keeping the things that Scepter was always very good at, such as customer intimacy,” Elliott said. “It takes years to change a company`s culture, but we`ve covered a lot of ground already. The end goal is to establish repeatable processes, to understand what works and what doesn’t, and to uphold the legacy of the Torkokvei family while unlocking Scepter`s fullest potential.”

Unlocking the full potential of any manufacturing company in Ontario isn’t easy these days, unfortunately, and part of Elliott’s job is to steer Scepter through difficult economic waters. “I’m gravely concerned about rising power costs in our province, and I’m always looking to upgrade the energy efficiency of our equipment, but there’s only so much you can do,” he said. “Federally and provincially, our politicians need to get back to sound business principles: defend the core and grow the specialties. The core of Ontario’s economy has always been manufacturing, so let’s nurture that, rather than adding more layers of bureaucracy and regulations. If the government borrowed a page from the 80/20 rule and strove for simplicity instead of complexity, Ontario would be much more competitive.”

Elliott’s involvement in plastics industry associations predates the days of rising industrial energy costs, and was motivated initially by the simple desire to give a little back. “I’ve always believed in giving back to the industry that gives me a living,” he said. “I started out working on the anti-litter and degradable sub-committees of CPIA’s EPIC group, and then towards the end of my time at Ampacet, when the leadership team was able to run more of the business, I increased my involvement.” Elliott became chair of the PFMAC in 2012 – which includes a seat on the CPIA board of directors – and served as chairman of CPIA’s board of directors from 2015 to 2017, earning praise from his colleagues along the way. “During his tenure as CPIA chairman, Terry provided extraordinary guidance as it faced the difficult times that all Industry associations are currently facing,” said fellow board member Sean Dennis. “Even during a major change in his employment, he never lost focus on the many needs of CPIA.”

Winning a CPIA award isn’t entirely new to Elliott: in 2013 he was selected for a Canplast Award, presented to individuals who contribute their time, energy, and expertise to improving the competitive and environmental performance of Canada’s plastics industry. Receiving a Leader of the Year award catapults him into a whole new echelon, however. “Being recognized by your peers is always a tremendous honour,” Elliott said. “But I’ve learned so much from so many outstanding people over the years – both mentors and coworkers – that this award is really a tribute to them.”