Going the extra miles for Aoki

Jose Penaloza will rack up at least 20 trans-Pacific flights this year as part of his push to increase Japanese injection stretch-blow molding machine maker Aoki’s presence in Canada. That’s a lot of hang time, but it’s beginning to pay off.

Septuagenarian singer/songwriter Bob Dylan has basically been touring non-stop since 1965, but even he might envy Jose Penaloza’s recent collection of frequent flyer miles. 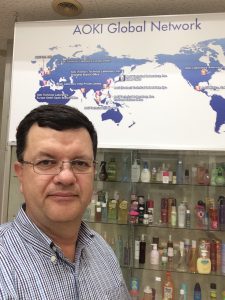 Penaloza, the head of Mississauga, Ont.-based sales firm Penzola Solutions, which represents Japanese injection stretch-blow molding machine maker Aoki Technical Laboratory Inc. in Canada, has flown to Aoki’s headquarters and manufacturing plant in Ueda, Japan no less than eight times between March and October 2017, and has at least two more trips scheduled by the end of the year. 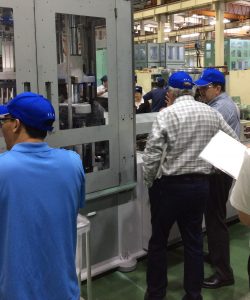 Penaloza (at right) talking to a customer at an Aoki open house in Ueda, Japan.

It’s all part of Aoki and Penaloza’s plan to expand Aoki’s Canadian profile, and part of a larger push by Aoki to increase its global footprint through a year-long series of open houses in Ueda. “Aoki has been having one open house per month since March,” Penaloza said. “The open houses are regional: one for the Middle East, one for Asia, one for North America, and so on. The goal is to show customers and potential customers that, because of Aoki’s latest technological developments, they could be molding the same containers faster than before, with minimal expenditure of time and energy.”

A mechanical engineer by training, Penaloza cut his teeth in equipment sales by representing Aoki in his native Colombia in the 1990s. Immigrating to Canada in 2001, he worked as a sales representative for Ontario-based blown film equipment maker Brampton Engineering for almost a decade before founding Penzola Solutions and reestablishing his connection with Aoki. “Selling Aoki blow molding machines is very different from selling injection molding or extrusion units, and even different from selling competing blow molders,” he said. “With Aoki I’m selling a complete solution, and most of the time I’m working around the customer’s final product, not the Aoki machine itself. A typical conversation with a client begins with the final product and its many parameters and factors, and then moves outward to finding the right machine to make it. Once we’ve determined what that mold and machine system is, Aoki assembles and tests it in Japan, and then ships it to the customer as a turnkey system.”

It’s this part-centric approach that helped necessitate Penaloza’s many trips to Japan this year. “As part of designing the right solution, we want customers to be present at mold trials, so I accompany them if their schedules allow them to travel,” he said. “If not, I go on the customer’s behalf with the part dimensions and specifications they require and update them on the mold trials through real-time videos and by shipping samples to them overnight.” 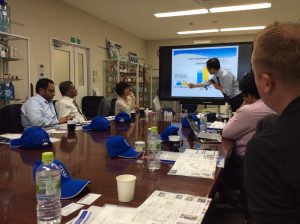 Customers attending a seminar at the Aoki HQ.

On the increasingly rare occasions when he’s back home in Ontario, Penaloza keeps in close contact with Aoki’s American headquarters in Chicago. “Service and parts for Canada come from the Chicago office, and I also take customers there for training,” he said.

Aoki was founded in 1975 by famed Japanese plastics inventor and entrepreneur Katashi Aoki, who had also founded injection molding machine maker Nissei in 1947. Beginning in 1984, the company’s stretch-blow machines and molds have been unique in incorporating Direct Heatcon, a proprietary molding technology designed to eliminate the need for reheating by enabling preforms to be injection molded and heat conditioned at the same time. “With Direct Heatcon technology, raw material is molded into finished containers in just three stations,” Penaloza said. “By using residual heat from the process of injection molding preforms from raw material, Direct Heatcon eliminates preform reheating costs, reduces preform cooling time, and enables chillers to be downsized. This can drastically reduce unit molding costs and enable higher volume production.” Transportation costs can also be reduced, he said, since Direct Heatcon eliminates the need for preform transportation that frequently constitutes a part of the reheating method; and molding containers directly from raw material on a single machine using the minimum number of molding steps reduces the risk of breakdowns and defects. “Additionally, Aoki has made great strides in the past five years, cutting cycle times almost in half by removing the preform from the mold faster than before,” he said. “The latest-generation machines are also blowing the bottles at a lower pressure, which means even more energy savings.” 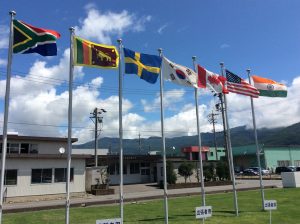 Flags representing the different nationalities of visitors at an open house fly at the Aoki HQ.

While both Penaloza and the Aoki staff believe they have the innovative solutions that can break open the Canadian blow molding market, some challenges remain – one of which is actually a good one to have, and is common to Aoki sales representatives. “As a sales representative for Aoki, it can be difficult to keep up,” Penaloza said. “The company’s full name is still Aoki Technical Laboratory because the owners still consider it to be a laboratory that constantly develops new injection stretch-blow molding technologies. Which means that the other sales reps and I are always surprised when we visit Japan and learn about something new. My bottle samples become obsolete very quickly.”

A second challenge is uniquely and inherently Canadian. “The market for blow molding machines in Canada is obviously smaller than in the U.S. and many other countries, and demands more searching for new customers, and more cultivation when I find them,” he said. “Aoki’s presence in Canada was limited for a long time, but with my efforts and Aoki’s help, we are increasing the company’s visibility and I’m making connections with more and more potential customers. This year has been very intense, and I’m torn about whether or not I want it to get less intense next year.”

It’s a conundrum Bob Dylan could probably relate to.