GreenMantra Technologies: Waste not, want not

Alchemy was an ancient practice that sought to turn lead into gold. Its practitioners never could get it to work, but the idea of taking something that’s basically worthless and making it valuable is universal — and GreenMantra Technologies Inc. is actually achieving it today.

The Brantford, Ont.-based clean technology company uses a patented process that transforms low-value waste plastics destined for landfill sites into value-creating speciality chemicals such as synthetic waxes and polymer additives. GreenMantra’s end products, which are sold under the Ceranovus brand name, are PE and PP additives that can be custom formulated to meet specific performance requirements, and which can be used in rubber compounding and asphalt modification for roofing and paving, plastics processing and composites, polymer and rubber compounding, coatings and inks, and other applications. “Our goal is to up-cycle recycled plastics into unique specialty materials that deliver value in industrial applications, creating a more circular economy for plastics where they’re beneficially reused rather than landfilled,” said GreenMantra CEO Jodie Morgan.

Founded in 2010 with an initial investment from the MaRS Accelerator Fund, GreenMantra built its first demonstration facility in Brantford; and at the end of 2014, a series of investments by venture capital, combined with both provincial and federal funding, allowed the company to complete construction of a commercial-scale facility, also located in Brantford.

From the start, GreenMantra found eager customers, including the City of Vancouver, which incorporated the firm’s waxes into its mix for asphalt paving. With that door opened, the company saw more interest and adoption from other Canadian and U.S. customers. At the heart of GreenMantra’s production process is a set of proprietary heterogeneous catalysts that enables selective thermal catalytic depolymerization reactions to occur. The catalysts deliver higher yields and control factors such as molecular weight and structural and thermal properties of the final product, which also allows GreenMantra’s process to operate at a much lower temperature than other chemical recycling processes while avoiding the randomness of depolymerizations experienced in processes based on pyrolysis or gasifaction. “This allows us to deliver conversion yields as high as 95 per cent,” said Domenic Di Mondo, GreenMantra’s vice president of technology and business development. 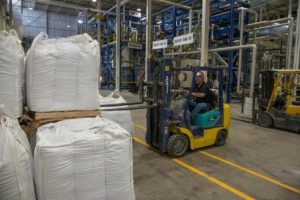 Small wonder, then, that GreenMantra’s uniqueness was recognized early on. In the fall of 2010, the Canadian Innovation Exchange named it one of Canada’s 25 most innovative companies. Since then, more accolades have followed: In 2016, GreenMantra received the R&D100 Gold Award for Green Technology; in 2017, it was recognized as one of the top 100 clean technology companies by Global Cleantech, was honoured by the Canadian Plastics Industry Association with its Sustainability Award for clean technology, and won the Ontario Export Awards’ Clean Technology Award; and in 2018, it was named one of Canada’s 500 fastest growing manufacturing companies. GreenMantra is also not shy about partnering with established players in the chemicals world. In September 2017, the company announced a partnership with Sun Chemical, the world’s largest producer of printing inks, to jointly develop polymers from recycled PS waste for use in ink formulations. And in May 2019, it entered into a joint partnership with Ineos Styrolution to convert post-consumer PS into chemical monomer building blocks that can be used to replace a portion of virgin monomer feed in Ineos’ polymerization process.

Another plus for the company is being located in Brantford, Di Mondo said, an area in southwest Ontario that has been hungry for manufacturing capacity since the auto sector’s exit during the economic downturn of 2009. “There’s a robust pool of qualified manufacturing workers here, and our proximity to university towns such as Guelph and Waterloo supplies a steady stream of qualified candidates for hire,” he said.

GreenMantra made another advancement recently when it announced the development of an allied technology that converts post-consumer PS into unique styrenic polymers with applications in inks, coatings, and insulation. GreenMantra began construction of a demonstration plant for this technology in 2018, being built at its existing manufacturing complex in Brantford. The new plant is scheduled to be operational by the end of this year. “PS in foam and solid form is commonly used in consumer products, food and product packaging, and many other applications,” Di Mondo said. “It’s one of the world’s fastest growing solid wastes, but it has one of the worst recycling rates of all plastics, with an estimated 95 per cent either disposed of in landfills or incinerated. We want to help reverse this trend.” Using a proprietary catalyst and unique conversion process, GreenMantra has converted waste PS foam into unique short-chain styrenic polymers on a laboratory scale. “Our new demonstration plant will provide an initial supply of converted modified styrenic polymers to enable customer qualifications in a variety of end-use applications and to seed commercial sales,” Di Mondo said. GreenMantra’s approach to post-consumer plastics bucks a trend followed by other clean technology companies of turning the discarded material back into its building blocks or other low-value applications such as lawn furniture.

“Plastic in general is a fairly low-value product, so it doesn’t make sense to spend a lot of money collecting it, sorting it, and processing it just so that it can go back into another relatively low-value end product,” Morgan said. “In order to boost plastic recycling rates around the world, recycling has to be more worthwhile, which means that waste plastic needs to be up-cycled into higher value applications.” For example, GreenMantra’s technology turns discarded Styrofoam into something completely different — instead of breaking the Styrofoam chains into their individual links, it only cuts them into smaller pieces, thereby generating a new material. “By using this molecule, we can create products that can have much more value than the original plastic,” Di Mondo said. By making valuable new polymers from old polymers, GreenMantra is successfully keeping the molecules in play — the definition of a circular economy. “And because we combine technology with sustainability to create differentiated specialty polymers and waxes, we’re giving our customers a wide range of benefits, including improved product performance, reduced formulation and manufacturing costs, and increased use of post-consumer recycled materials,” Di Mondo said.

Think of it as a kind of modern-day alchemy that actually works.