Researchers from Switzerland's University of Fribourg and Japan's Hokkaido University have devised a polymer with a sensor molecule that glows when it’s stretched, signalling that mechanical stress is building towards a catastrophic part failure.

If your Significant Other ever blew up at you suddenly because they’re stressed out and you didn’t know it and said the wrong thing, you appreciate the value of being warned in advance when something is under too much pressure.

Getting advance warning when material in a plastic part is under stress has always been hit-or-miss: scientists have previously developed polymers that change their optical properties in response to mechanical stress, but the change is generally triggered by the breaking of molecular bonds within the material, so it can only happen once. Additionally, those bonds can also be broken by stimuli such as heat and light, resulting in false alarms.

With these limitations in mind, researchers from Switzerland’s University of Fribourg and Japan’s Hokkaido University have devised a polymer with a new type of sensor molecule that can only be activated by mechanical force – it glows when it’s stretched, signalling that mechanical stress is building towards a catastrophic part failure. 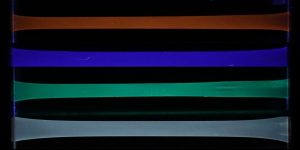 To do this, they built upon their previous work, published last year, in which they developed a type of polyurethane that contains stress-sensing rotaxane consisting of ring-shaped fluorescent molecules threaded on dumbbell-shaped molecules featuring so-called “quencher groups” – which decrease the fluorescence intensity of a given substance – at their centre. In the relaxed polymer, the quenchers are near the fluorescent rings and prevent them from glowing under ultraviolet light. Stretching the polymer moves the quenchers and fluorescent rings apart, causing the material to glow green. The more the material is stretched, the brighter it glows, and it goes dark again once the stretch is released. The process can be repeated indefinitely.

In the current study, the researchers developed three new polyurethanes that glowed blue, green or orange when stretched, demonstrating that the colour can be tailored simply by using different cyclic fluorescent rings in the rotaxanes. Again, the materials emit light of greater or lesser intensity, depending on how much they’re stretched. By combining the three polymers, the researchers said, they created the first white-light-emitting polymer that can instantly be switched on and off mechanically.

Potential applications for such materials include built-in monitors that send visual warning signs before a part fails, or that enable engineers to map stresses in parts under load and help them design these better.