Researchers at MIT have paired high-frequency silicon chips with a polymer cable as thin as a strand of hair to create a data transfer system that can transmit information 10 times faster than a USB. 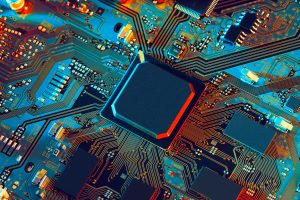 In a development that draws on benefits of both copper and fibre-optic conduits without their drawbacks, researchers at the Massachusetts Institute of Technology (MIT) have paired high-frequency silicon chips with a polymer cable as thin as a strand of hair to create a data transfer system that can transmit information 10 times faster than a USB.

The system – which may one day boost energy efficiency in data centres and lighten the loads of electronics-rich spacecraft – uses a conduit made of plastic polymer, which makes lighter and potentially cheaper to manufacture than traditional copper cables. But when the polymer link is operated with sub-terahertz electromagnetic signals, it’s far more energy-efficient than copper in transmitting a high data load. The new link’s efficiency rivals that of fibre-optic but has a key advantage: “It’s compatible directly with silicon chips, without any special manufacturing,” said team leader Jack Holloway, a PhD researcher at MIT’s Department of Electrical Engineering and Computer Science (EECS).

MIT is located in Cambridge, Mass.

The team engineered such low-cost chips to pair with the polymer conduit. Typically, silicon chips struggle to operate at sub-terahertz frequencies. Yet the team’s new chips generate those high-frequency signals with enough power to transmit data directly into the conduit. That clean connection from the silicon chips to the conduit means the overall system can be manufactured with standard, cost-effective methods, the researchers say.

The new link is also superior to copper and fibre-optic in terms of size. “The cross-sectional area of our cable is 0.4 millimeters by a quarter millimeter, so it’s super tiny, like a strand of hair,” said Ruonan Han, associate professor and Holloway’s PhD adviser in EECS. “But despite its slim size, it can carry a hefty load of data, since it sends signals over three different parallel channels, separated by frequency.” The link’s total bandwidth is 105 gigabits per second, which is nearly an order of magnitude faster than a copper-based USB cable.

In future work, the researchers hope to make the polymer conduits even faster by bundling them together. “Then the data rate will be off the charts,” Han said. “It could be one terabit per second, still at low cost.”

The researchers also suggest that “data-dense” applications, like server farms, could be early adopters of the new links since they could dramatically cut data centres’ high energy demands. The link could also be a key solution for the aerospace and automotive industries, which place a premium on small, light devices.

And one day, the link could replace the consumer electronic cables in homes and offices, thanks to the link’s simplicity and speed. “It’s far less costly than (copper or fibre-optic) approaches, with significantly wider bandwidth and lower loss than conventional copper solutions,” said Holloway.