A new soft polymer material is capable of ‘thinking’

Developed by collaborators from Penn State University and the U.S. Air Force, the material senses and reacts to tactile input, such as force. 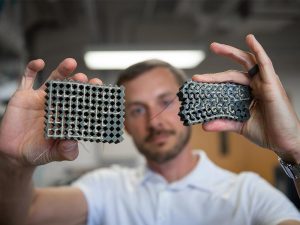 Researchers in the U.S. have developed a soft polymer material that can “think” about what’s happening around it by sensing and responding to mechanical stress without – as is usual – requiring additional circuits to process such signals.

Developed by collaborators from Penn State University, in State College, Pa., and the U.S. Air Force, the technology hinges on a novel, reconfigurable alternative to integrated circuits. For the uninitiated, integrated circuits are science’s current best approximation of information processing similar to the brain’s role in the human body. Integrated circuits are typically composed of multiple electronic components housed on a single semiconductor material, usually silicon, and they run all types of modern electronics, including phones, cars, and robots. According to principal investigator Ryan Harne, James F. Will Career Development Associate Professor of Mechanical Engineering at Penn State, integrated circuits are the core constituent needed for scalable computing of signals and information, but have never before been realized by scientists in any composition other than silicon semiconductors. Until now.

Harne’s team has now used integrated circuits in a soft polymer material that acts like a brain that can receive and process digital strings of information, resulting in new sequences of digital information that can control reactions: when the material receives external stimuli, it translates the input into electrical information that is then processed to create output signals. “We have created the first example of an engineering material that can simultaneously sense, think, and act upon mechanical stress without requiring additional circuits to process such signals,” Harne said.

The technology builds upon previous work to develop the novel material that stretches back over decades, including using information from a 1938 paper that described a way to create an integrated circuit by constructing mechanical-electrical switching networks. Harne and his team had already developed a soft, mechanical metamaterial that can “think” about how forces are applied to it and respond using programmed materials, which was outlined last year in a paper published in Nature Communications. That material, however, could only operate on binary input-output signals, not compute high-level logical operations, Harne said; the new material goes much further in functionality thanks to the inclusion of reconfigurable circuits, and can use mechanical force to compute complex arithmetic, detect radio frequencies to communicate specific light signals, and even realize combinational logic.

The researchers are now evolving the material to process visual information in the same way that it does physical signals. “We are currently translating this to a means of ‘seeing’ to augment the sense of ‘touching’ we have presently created,” Harne said. “Our goal is to develop a material that demonstrates autonomous navigation through an environment by seeing signs, following them and maneuvering out of the way of adverse mechanical force, such as something stepping on it.” According to Harne, the material has potential applications in autonomous search and rescue systems, in infrastructure repairs, and even in bio-hybrid materials that can identify, isolate, and neutralize airborne pathogens.