Polymer device could save the limbs of injured soldiers

In what might be the best military news since the United States Navy SEALS tracked down bin Laden, soldiers wounded by gunshots and improvised explosive devices (IEDs) may soon be treated with a polymer-based medical device that can literally save limbs by promoting new bone growth.

The research is being led by Matthew Becker, a professor of polymer science at the University of Akron in Ohio, and involves using a cylinder-shaped polymeric shell to stabilize the site of injury while the missing bone regenerates. Becker’s team of scientists from the University of Akron, the Houston Methodist Research Institute, and Texas A&M University received a US$6 million grant from the U.S. Army Medical Research and Materials Command to fund their work in this limb-salvage technique. 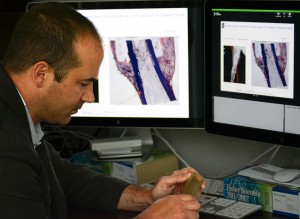 The team’s recently completed two-year pilot study involved the use of a biodegradable polymer scaffold that bridges the injured bone site, stabilizes the area of missing bone, and stimulates bone regrowth in it. The shell, which is the vital component to inducing limb healing and patient recovery, is filled with decellularized collagen developed at the Houston Methodist Research Institute.

According to Becker, a real-world example of the procedure in use would unfold something like this: a soldier in the Middle East or any other military hot-spot endures a traumatic IED or gunshot injury; he or she is then flown to Germany for a CAT scan to characterize the injury; then, while en route to the U.S. for the limb-saving procedure, a scaffold customized according to the patient’s CAT results is prepared for the limb surgery. “This could be a transformative advance,” Becker said, noting that the device and procedure have the potential to spare injured military members who have enough remaining bone and soft tissue from limb amputation.

Becker’s team developed the polymer-based scaffold while researchers at the Houston Methodist Research Institute conducted preclinical trials. Texas A&M scientists, meanwhile, studied the biomechanics of the newly developed limbs in these studies. The polymer synthesis will be scaled up with the assistance of Akron-based material supplier Akron Polymer Systems; and the finished shells for use in humans will be molded by West Layaette, Ind.-based Cook Biotech, a medical technology company specializing in regenerative medicine.

And the technology doesn’t have to be confined to battlefield incidents. The polymer scaffold “would have been a game-changer in civilian incidents like the Boston Marathon bombing,” Becker said.

Becker anticipates that initial materials will be ready for military trials in wounded soldiers by early 2016.