Multi-material 3D printers have arrived. But so have challenges to wide-scale adaptation, beginning with the machines’ hefty price tags.

How revolutionary is 3D printing for the manufacturing world? Potentially as game-changing as Neil Armstrong stepping onto the Moon was for NASA. By enabling a machine to produce objects of any shape, on the spot and as needed, 3D printing is ushering in a genuinely new era.

And it’s happening fast. The process was actually invented back in the early 1980s, and languished for the better part of two decades before going mainstream 10 years ago. Since then, there seems to be no stopping it. The technology has captured the popular imagination, and 3D printers have evolved to the point where they can now use all kinds of materials, including plastics, chemicals, rubber, metals, ceramics, sugar, wax, and even living cells. It means designers can progress rapidly from concept to final product.

But if the process has an Achilles Heel, it’s this: Most machines are still limited to a single-material build, which has set a limitation on the technology when many finished products today require multiple materials. But that’s about to change. Innovators in the field are beginning to release multi-material 3D printers, capable of producing parts with complex and variable properties.

At its most basic, multi-material 3D printing lets the user combine two or three base resins in a single print job to simulate overmolding, generate three-material prototypes, or produce trays of assorted parts in a single print job. With more advanced systems, software combines even more materials in specified concentrations and microstructures to produce digital materials with varying translucency, rigidity, thermal resistance or colour.

Stratasys released its first multi-material 3D printer way back in 2007. Its latest offering, the Objet500 Connex3 system, is capable of working with 14 different base materials, the company said, allowing for hundreds of two- and three-component mixes that offer a range of property variations with colour, biocompatibility, rigidity, thermal resistance, and optical level. “In a single build, the machines are able to mix three different base resins in pre-set configurations that can produce up to 82 different material properties,” Stratasys said.

Other printer makers are following suit. Hewlett-Packard plans to release the new Multi Jet Fusion technology later this year, capable of employing various materials across a given object, point-by-point, at the level of the volumetric pixel. According to Hewlett-Packard, its technology will be able to produce variable mechanical and physical properties, including opacity and translucence, texture, strength and elasticity, colour, and electrical and thermal conductivity. Hewlett-Packard will start with thermoplastics, but the company said it intends to expand into ceramics and metals.

This isn’t to say there aren’t still drawbacks. Current multi-material 3D printing systems have a couple of shortcomings, beginning with price. A Stratasys Objet500 Connex3 printer costs up to $250,000, for example, with materials priced at $500 per kilogram. 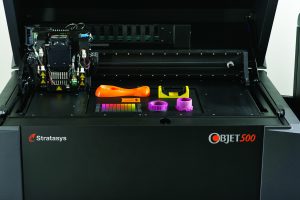 Massachusetts Institute of Technology researcher Javier Ramos put his finger on a second limitation in a 2015 technical paper. “The hardware and software architectures for current multi-material 3D printers are proprietary and inextensible,” he wrote. “The exposed input file format, made of separate STL files for each material, is limiting; and any changes to the underlying hardware and software are virtually impossible.”

Third — and as with traditional 3D printing — multi-material printing is slow. The slow speed is inherent to the 3D printing process, alas, because it makes a product one layer at a time — which means it’s not a problem that’s going to be solved anytime soon.

These are still very early days for multi-material 3D printing, of course, and — with the possible exception of the slowness of the process — it’s unlikely that today’s technical hurdles will remain hurdles for long. So don’t be too surprised if the far-ranging potentialities of the technology — allowing users to fabricate materials with combinations of density, strength, and thermal expansion that don’t exist yet — might just further revolutionize the manufacturing sector.