What do TV star Jason Priestley, cake toppers, and yogurt containers have in common? They’ve all been 3D-printed in stunning detail by this innovative Toronto-based startup. And they might just be the tip of the additive manufactured iceberg. 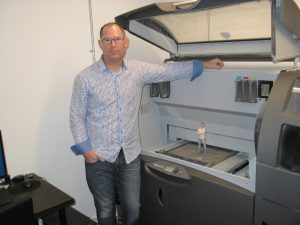 In addition to 24/7 traffic gridlock and a professional hockey team that habitually overcharges and underperforms, one of the problems with modern-day Toronto is the lack of meaningful manufacturing going on in the city’s downtown core. It used to be a mecca for making things, but nowadays if you had a few bucks for every shuttered factory that’s been turned into an upscale, industrial-themed condominium complex, you’d probably have more cash on hand than Justin Bieber.

Which is why it’s nice to see a recent startup like MY3DAGENCY.COM come along. Located in Toronto’s Liberty Village area — about as downtown as it gets — the company is a leading 3D printing innovator, specializing in producing finished production-quality concepts for Canada’s consumer goods packagers and lifelike scale models for the country’s professional athletic, bridal, entertainment, and action figure industries.

MY3DAGENCY.COM was founded in 2014 by company president Michael Gossack with the idea of tapping into one of the ultimate niche markets: using 3D printing technology to make limited edition collectible figures of actors, athletes, and musicians. “Our concept was to get big names in the entertainment and sports industries to endorse realistic, 3D-printed scale models of themselves,” Gossack said. “They could then advertise the models online and by tweeting it out to their fans, and we would print each model as it was ordered.”

Unlike crude, cartoon-like figurines designed from one or two photographs — think bobblehead dolls, for example — MY3DAGENCY.COM carefully scans an individual in person to guarantee the most realistic, lifelike model possible. “It takes about four minutes to make a complete scan of an individual from head to foot using a handheld scanner,” Gossack said. “The data is then sent to a graphic designer who combines, edits, and adds texture to the information for a print-ready 3D model, and then uploads the file into our 3D printer. Each model typically takes a few hours to print, and then goes through a few steps of post-processing and finishing, and is then ready for shipping.” The 6-inch models sell for an average price of $179, he added.

At present, MY3DAGENCY.COM is about as lean as a manufacturing company can get, with three employees and a single ProJet 660 Pro 3D printer. “It’s the simplest and most efficient large-build, full-colour 3D printer of its class on the market, with a net build area of 10 x 15 x 8 inches,” Gossack said. “The materials we print with are all polyamide granular powders, which are strong, flexible, and allow us to achieve a high level of detail.”

Television actor Jason Priestley was the first Canadian star to have himself 3D-printed by MY3DAGENCY.COM; other notables to date include middleweight boxing champ Stephan Boyd and film and TV actress Tatiana Maslany. As with anything involving the rich and famous, things can get complicated if you’re not careful. “Other than politicians — who are in the public domain — we require a celebrity’s permission to make a 3D model of them, so I’ve had to learn a fair bit about copyright and infringement law to pursue this line of manufacturing,” Gossack said. 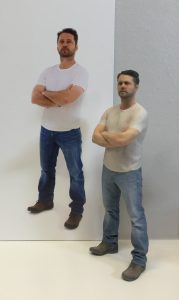 The real Jason Priestley in the photo backdrop and a 3D-printed model in the forefront. Photo Credit: MY3DAGENCY.COM

And that’s in addition to having to teach himself how to 3D-print, period. “Additive manufacturing is a new and evolving technology, which makes it very difficult to learn; online videos that purport to give you instructions tend to be doctored and unreliable,” Gossack said. “In the early days, we actually had to pay a competitor to come in and give us some basic lessons; the rest of the process we learned on our own through trial and error, at the cost of a lot of time and expensive printing material.”

But the upside is a business model that seems rock solid. “Since we only print models to order, we don’t lose money by having unsold stock piling up,” Gossack said. “We’ve already been successful enough to have forced our biggest competitor to change its manufacturing style and offer six-inch models, like ours, at much cheaper prices.”

The company has also expanded its model-making from sports and entertainment figures to everyday people — brides and grooms in particular. “There’s enormous potential for us to 3D-print customized brides and grooms as wedding cake toppers,” Gossack said. “They’re a lot more appealing than the generic cake toppers the wedding industry has been supplying for decades.”

Other manufacturing possibilities, he continued, include creating precise, miniature models of buildings for architects, developers, and engineers; and models of employees, commissioned by their employers, to recognize outstanding achievements or work anniversaries.

But MY3DAGENCY.COM’s biggest new opportunity might just be in reducing the time and cost of creating new consumer goods packaging concepts and prototypes. “We have the ability to take the physical specification requirements and the artist’s conceptual drawing and quickly and accurately integrate them into a finished production-quality form that helps everyone to immediately understand what’s intended from the key perspectives of corporate brand, consumer function, and overall design,” Gossack said.

The company just passed its first test in this sector with flying colours: designing a new plastic yogurt container for Toronto-based packaging supplier Tier One Promotion Packaging Inc. “Tier One needed a finished production-quality container concept to work in association with its exterior labelling for this new container, which was for a customer in China,” Gossack said. “We were able to 3D-print four prototype containers, and Tier One used those to develop and manufacture exterior packaging for the customer on time and on budget. Tier One’s president later told us they only took the job because they knew we were available to help them. So it’s nice to have played a role in keeping some manufacturing here in Canada.”

It’s because of this last aspect that Gossack sees an especially valuable role for 3D printing. “If a consumer goods packager needs 10 prototype products or less, it’s easy for us to do — they no longer have to go overseas for part production and wait weeks or months for a finished prototype,” Gossack said. “As long as we have an electronic file of an artist’s drawing of the proposed bottle or container, we can 3D-print it for less money in less than a week. The possibilities are endless, and it’s all done by us in-house. Product concepts created using 3D printing will help to reduce manufacturing costs, improve time-to-market indices, and enhance the overall consumer experience.”

Now if they could just print a solution to TO’s gridlock nightmare, we’d be good.