Created by a team from Japanese research institution Riken, the material almost completely recovers its original strength within minutes of being cut. 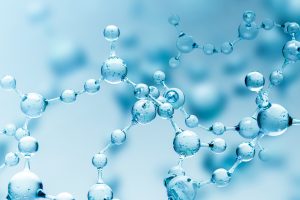 Researchers at Riken, Japan’s largest comprehensive research institution, have developed a polymer that heals itself with unprecedented speed and efficacy when cut, and which almost completely recovers its original strength within minutes.

Increasing the structural complexity of polymers offers great promise for developing new materials with novel or improved properties, and has long been the goal of researchers around the world. But the controlled synthesis of complex polymers remains challenging – and this latest development was produced using an advanced catalytic method for combining multiple precursors into a single polymer in a controlled fashion

Riken lead researcher Zhaomin Hou and his colleagues recently developed a controlled catalytic method for combining non-polar and polar olefin monomers into a single polymer. “We previously discovered that we could synthesize multiblock copolymers that exhibited excellent elasticity and self-healing by using the two-component copolymerization of non-polar ethylene and polar methoxyaryl-substituted propylenes by a half-sandwich scandium catalyst,” Hou said.

The two-component polymers’ properties depended strongly on the methoxyarylpropylene used. “This raised the intriguing question of whether a three-component ‘terpolymer’ of ethylene and two different methoxyaryl-functionalized propylenes would show unique synergistic effects on the mechanical and self-healing properties,” Hou added.

Now, Hou, four Riken colleagues and a collaborator have confirmed that terpolymers can show unprecedented mechanical and self-healing performance. Their elastomeric polymer could be stretched to almost 14 times its original length before breaking. And when cut in two, the polymer healed itself within five minutes to recover 99 per cent of its toughness and 97 per cent of its tensile strength.

“The polymer’s excellent elastomeric and self-healing properties are due to the formation of this nanoscale three-dimensional network,” Hou said. The long, soft sections form a highly flexible matrix, within which are hard and crystalline sections that rapidly re-aggregate after the material is cut, thereby self-healing any damage.

According to Hou, this polymerization method using a scandium catalyst offers many avenues for further polymer development. “We anticipate our approach will enable additional functions to be easily incorporated into this novel class of self-healing polymer,” Hou said. “And we expect our self-healing mechanism will guide the design and creation of various new self-healing polymers through microstructural control.”