At the same time, input cost inflation moderated to a nine-month low, with manufacturers attributing this to a stronger exchange rate against the U.S. dollar, the report by IHS Markit said.

Canadian manufacturers experienced a robust and accelerated improvement in overall business conditions in July of 2017, according to a new survey report conducted by research firm IHS Markit.

“The latest survey revealed the fastest rate of production growth since March 2017, driven by improved new order books and supported by a further solid rise in employment numbers,” IHS Markit said. “At the same time, input cost inflation moderated to a nine-month low, with manufacturers attributing this to a stronger exchange rate against the U.S. dollar. Demand for raw materials continued to strengthen, with the latest increase in purchasing activity the fastest since December 2014.” 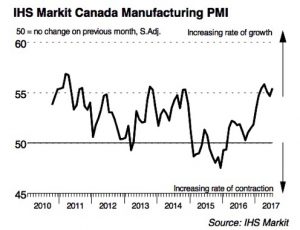 “Faster output growth was a key driver of the upturn in the headline PMI figure in July,” the firm said. “Production volumes were expanded to the largest degree for four months, which survey respondents linked to improved demand and greater willingness to spend among clients.”

July data indicated the steepest rise in total new work for three months, the survey report continued. “There were signs that the accelerated pace of new order growth was driven by domestic spending, as the latest increase in export sales was weaker than in June,” it said.

Manufacturing companies responded to rising workloads by hiring additional staff during July, the IHS Markit report continued. “A rebound in employment numbers has been recorded since October 2016, helped by improved business confidence and efforts to rebuild production capacity.”

Additionally, exactly 40% of the survey panel forecast an expansion of output volumes over the year ahead, while only 5% anticipate a reduction.

Regionally, the IHS survey revealed that Alberta & B.C. remained the best performing area for manufacturing growth in July 2017; the fastest rises in new orders were recorded in Alberta & B.C., and Ontario; and manufacturing employment increased in all four regions monitored by the survey in July.