The Pakman case packer features a collating indexing accumulation system to accumulate complete layers of bottles inside the packaging cell. 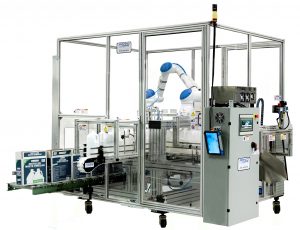 Proco’s case packer has seen several generational changes which have delivered greater efficiencies with the focus of bringing innovative technology to bottle packaging. The latest iteration is a breakthrough collaborative robotic automation system that works interactively with co-workers and needs minimal training for teaching new tasks.

“These systems are being designed in such a way that they complement the production line and provide simplified operation, a smaller footprint, and enhanced efficiencies,” said Siva Krish, Proco’s vice president of sales. “These collaborative robotic systems reduce the handling of the container and provide an excellent return on investment (ROI).”

Tooling considerations are important in the development of cobot systems for the blow molding of plastic containers. Proco’s Pakman case packer features a collating indexing accumulation system to accumulate complete layers of bottles inside the packaging cell. The accumulation table stages the layer of bottles so they can be picked up by Proco’s end-of-arm (EOA) tooling and placed inside the box.

Traditional robotic movement by row would slow the cycle time of the packaging system. The accumulation indexing conveyor helps to increase the line speed of the Pakman packaging cell since there will be one movement of the robot per layer. PET containers – caused by high static of the heated bottles – tend to repel each other when they’re close together. The layer pack EOAT technology ensures that containers are placed inside the box as a complete layer, preventing any change of bottle position.

Another feature is Proco’s Integrated Rotary Inverting Technology which helps to rotate a layer of bottles to neck-down orientation. Proco’s Pakman packaging cell has the new advanced innovative feature that will help the processor pack bottles in all neck-down orientation in a layer formation. This feature doesn’t change the packaging cell size – instead, it’s an add-on feature that can be purchased later and fitted to the line.

The Proco Pakman case packer is a totally integrated packaging module and is supplied with a six-axis collaborative robotic arm, infeed conveyor, and a box conveyor all mounted onto a common sub-frame which in turn is fitted with leveling pads and castor wheels. It can be moved into position, set up, and quickly be in production.

These systems are highly compact and can fit between the blow molding lines. Proco’s compact case packer has a cell size of only 100-inch x 70-inch and consists of the following features: