The beverage giant's rPET innovations span its product portfolio and include multiple brands and packaging sizes. 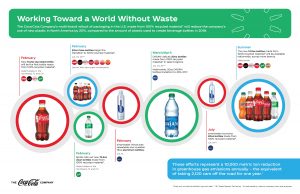 In an effort to reduce its use of new plastic, beverage giant Coca-Cola Co. has unveiled a new 13.2-ounce bottle made from 100 per cent recycled PET (rPET).

Coca-Cola North America’s rPET innovations spans the portfolio and includes multiple brands and packaging sizes. The 13.2-ounce rPET bottle – the first-ever Coca-Cola package made from 100 per cent rPET in the U.S. – will be available beginning in February at convenience stores in the Northeast U.S., as well as the states of Florida and California. The new bottle design will be used for Coke, Diet Coke, and Coke Zero Sugar and then go nationwide this summer. Select markets will also get Sprite in rPET bottles this month; and all Sprite packaging will transition to clear packaging, which is easier to be recycled and remade into new bottles, by the end of 2022.

Combined, these innovations represent a 20 per cent reduction in the company’s use of new plastic across its North American portfolio compared to 2018, Coca-Cola officials said in a Feb. 9 news release, and will collectively reduce 10,000 metric tons of greenhouse gas emissions annually in the U.S. – the equivalent of taking 2,120 cars off the road for one year.

The recycled bottles will also include a “Recycle Me Again” message on the label.

The bottle cap and label will not be made out of recycled materials.