It’s an old adage that you never want to know how the sausage gets made. But the food industry may want to pay close attention to a new artificial sausage casing technology developed by extrusion film equipment maker Tronoplast Technologies Inc.

Called HS-TRON, the system will allow the customer to cash in on the growing trend of artificial casings that allow using real smoke in the sausage-making process instead of smoke-flavoured additives – an option that, until recently, the food industry could only achieve by using sausage casings made from natural animal tissue. 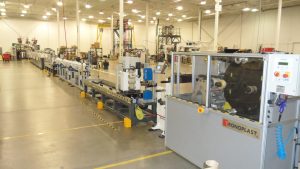 “The line, which uses a special polymer mix developed by the customer, is aimed at being the most productive line in the industry,” said Sergey Kotylev, Tronoplast’s vice president of operations. “Depending on the skin casing formulation, it produces about 300 meters per minute, but it can produce up to 400 meters per minute under optimal conditions, making it approximately 25 per cent faster than competing lines. It gives our customer a substantial competitive advantage.”

Tronoplast sent staff members to the customer’s operation to supervise the set-up process in May.

“We believe we have brought the artificial sausage casing technology to a new level,” Kotylev said. “And we’ve also developed a supplementary technology for preparing the customized raw material for breathable casing.”

It’s a sausage-making process you might actually want to watch.