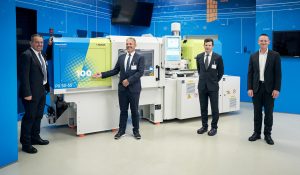 The company’s hundredth machine – an all-electric PX 50-55 that came specially painted to reflect its significance – is part of the modern smart production at Polycom’s new location in Dobje, Poljane nad Skofjo Loko/Slovenia.

“We have been benefiting from the innovative products and the tailored service provided by KraussMaffei for decades. We are now delighted with the 100th injection molding machine from our long-term partner,” said Iztok Stanonik, founder and chairman of the management board of Polycom. “This is a powerful symbol both for our good cooperation with KraussMaffei and its Slovenian agency KMS, and for the sustained growth of our company.”

KraussMaffei delivered the first injection molding machine to Polycom 25 years ago. The new all-electric PX 50-55, which has a clamping force 500 kN, now supports the modern production at the new location in Dobje, which was built in 2017.

The new PX 50-55 has the APC plus (Adaptive Process Control) machine function and the DataXplorer data analysis tool.

Founded 35 years ago with two injection molding machines, Polycom currently has more than 100 machines and almost 300 employees. The company  serves numerous  automotive component suppliers and other branches of industry both inside and beyond Slovenia.

And Polycom’s next investment with KraussMaffei wasn’t long in coming: In the course of the ceremonial handover of the 100th anniversary machine, Polycom ordered four more injection molding machines from the company.