The school offers one of only four accredited plastics engineering technology programs in the U.S. 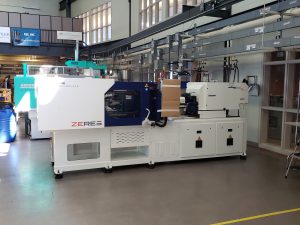 The plastics processing lab in the Jack Burke Research and Economic Development Center at Penn State Behrend in Erie, Penn. – one of only four accredited plastics engineering technology programs in the U.S. – has taken delivery of a 101-ton Zhafir Zeres injection molding machine from Absolute Haitian.

The consigned electric press with a 3.21-ounce shot size is equipped with integrated hydraulics for core pull, ejectors, carriage movement, and optional valve gates. Special options on the ZE 900/210 include processing capability for MuCell microcellular foaming technology from Trexel and software for iMflux low-constant-pressure injection molding. The Penn State Behrend lab has consignment agreements with Trexel and iMflux for the deployment of these technologies.

The team at Penn State Behrend took delivery of the ZE 900/210 on July 9, according to a release from Penn State Behrend, and the Zeres machine will be in operation in time for fall undergraduate classes, Plastics Training Academy classes, tutorials and conferences.

“We’re aware of the challenge the plastics industry faces in recruiting next-generation engineering talent,” said Glenn Frohring, one of the owners of Absolute Haitian, which is based in Worcester, Mass. “Providing access to current injection molding machine technology is one way we can help address this issue.”

“Penn State Behrend’s B.S. in Plastics Engineering Technology is the only plastics-specific undergraduate degree program in the Penn State system,” said Brad Johnson, lecturer in engineering at Penn State Behrend. “The college’s plastics processing lab is the largest and best-equipped undergraduate educational facility of its type. Graduate schools respect our students because they actually know how to operate an injection molding machine as well as other processing and testing equipment.”

Absolute Haitian is the exclusive sales and service partner in the U.S. and Canada for Haitian International, which is based in Ningbo, China.