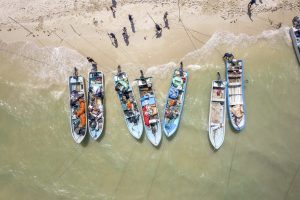 Mexican beer brand Corona marked Global Recycling Day on March 18 by holding its first global Plastic Fishing Tournament, a series of events held around the world to remove plastic debris from the ocean.

The events in China, Brazil, Mexico, and Israel drew about 150 people who spent more than 15 hours collectively fishing for plastic. In a news release, Corona officials say the events recycled five tons of plastic debris from waters worldwide as a result.

“As a result of the local efforts, the plastic collected will either be recycled or transformed for local communities such as community sculptures, pallets for transportation and beachwear merchandise,” the news release said.

The Plastic Fishing Tournament is the latest move in Corona’s commitment to become the beverage industry to become “net-zero plastic” producer, which was announced in 2021. To date, Corona says it has conducted over 1,400 clean-ups, engaged over 68,000 volunteers, and collected plastic waste from more than 44 million square meters of beach.