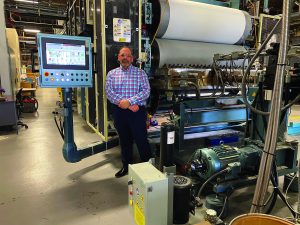 The new line, installed in 2019, supports Airlite’s thin-gauge sheet production for products of various thicknesses and textures, including proprietary Orthoform sheet used in fabricating orthotics and prosthetics, the primary market supported by the company’s Pennsylvania division.

In a press release, Davis-Standard said it engineered the line for strict repeatability, gauge control, product consistency and low scrap, all of which are essential to Airlite’s highly controlled processes. Airlite operates five sheet lines at the plant, all from Davis-Standard brand companies, to support customers from the U.S. and Canada, as well as a growing international clientele.

“Davis-Standard’s equipment has performed really well for us and that is part of the reason we are a return customer,” said Tony Alfieri, vice president and general manager of Airlite’s Pennsylvania division. “The new line is being used for our Orthoform products and some other customized work we do in thermoforming, die-cutting, printing and lamination applications.”

Alfieri said the right equipment combination is important because thin-gauge sheet production is challenging. His plant schedules operations around processing a unique mix of sheet thicknesses from 0.16 to .25 inches (4 to 6mm), and with different textures ranging from smooth to haircell. For example, the sheet used for Orthoform is drape-formed using a very specific resin, he said.

Airlite was founded in 1962, and is headquartered in Omaha, Nebraska. The company’s product lines include containers and lids for food packaging, drink cups and lids, as well as polystyrene coolers, insulated concrete form building blocks, and other custom plastic products.

Davis-Standard is headquartered in Pawcatuck, Conn. The company is represented in Canada by Auxiplast Inc., of Sainte-Julie, Que.