KraussMaffei turns 50 in the U.S.

KraussMaffei Corporation, the U.S. subsidiary of the Germany-based KraussMaffei Group with headquarters in Florence, Ky., celebrated its 50th anniversary on May 18 and 19 with more than 400 customers.

“We are very proud of what we have achieved and of our success since the company was founded in New York in 1966,” said KraussMaffei Corporation president Paul Caprio. “The 2015 financial year was very successful for all three brands and we are also expecting great results in 2016.” 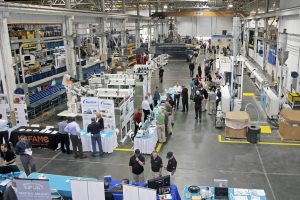 Inside the TechCenter of the Krauss-Maffei Corporation (Extrusion Technology) during the open-house event.

Caprio credited a number of factors for the company’s ongoing success in North America, beginning with the North American automotive sector. “In lightweight design, for example, customers of the brand KraussMaffei can benefit from solutions for manufacturing fibre-reinforced plastic components based on both thermoset and thermoplastic matrix systems,” he said.

The decision of many North American companies not to relocate their production to low-wage countries has also accelerated growth, Caprio continued. “We have always supported the strategy that goods for the U.S. market should be produced within the U.S. borders,” he said. This trend is also reflected in the current order situation of KraussMaffei Corporation – approximately 30 per cent of the incoming orders come from U.S. customers, Caprio said.

The North American thin-wall packaging sector is also experiencing good growth, to the company’s benefit. “In this area, we are very well positioned with the system solutions of the Netstal brand,” Caprio said. “For example, the new Injection Compression Molding technology ensures faster cycle times, lower clamping forces and a material consumption that is reduced by up to 20 per cent.”

The construction industry and the bulk chemical sector are another pillar of growth. In these areas, extrusion technology system solutions are particularly in demand, Caprio said, especially for the production of roofing sheets, foamed insulation panels as well as pipes and profiles.

KraussMaffei Corporation was founded in New York in 1966. In 1977, the company opened an extrusion systems plant in Wichita, Kan., and accelerated the sale of products on the North American market. In the early 1980s, the company began to sell injection molding machines in North America, and opened a new complex with offices and a production plant in Florence in 1986.