What’s in a name? Plenty. When the Windsor Association of Mold Makers changed its name to the Canadian Association of Mold Makers (CAMM) more than ten years ago, the goal was to reflect the group’s aspiration to be the voice for mold, tool and diemakers nationwide. Problem is, it hasn’t always felt that way, and the perception grew that CAMM remained, stubbornly, a Windsor, Ont.-based entity focused primarily on the concerns of its Windsor members – i.e., on the automotive industry.

Which is why CAMM established a Toronto chapter in 2010: to address some of the specific needs of member companies in the GTA that made molds for industries like packaging, medical, aerospace, and oil and gas. The Toronto chapter held two well-attended meetings…and then fizzled away into nothing, a victim of bad timing: the industry was then in the depths of the Great Recession and few could give the project the focus it deserved. 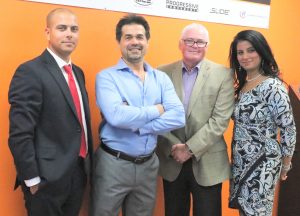 The CAMM Toronto board of directors. From left to right, Jonathan Azzopardi, Cyrus Jebely, Russell Vardy, and Kim Thiara.

But the need for a Toronto chapter remained – and it’s now been revived, with a new and determined board of directors at the helm. The new board consists of Kim Thiara, president and CEO of AceTronic Industrial Controls Inc.; Cyrus Jebely, president of Cap-Thin Molds Inc.; Russell Vardy, senior technical sales with Bohler Uddeholm; and Jonathan Azzopardi, president of Laval International and also the national president of CAMM.

“Moldmakers in the two big Ontario regions of Toronto and Windsor need to do a better job of working together and sharing strengths, and a Toronto chapter can facilitate this,” Azzopardi said. “Also, politicians like to make announcements in the media epicentre of Toronto; so to grab their attention and help them understand our industry better, it helps us to have a presence here. Moldmakers know the importance of making these connections with local and federal politicians – and also with foreign shops looking for partners – but they’re usually too busy managing their shops day-to-day to do it themselves. With the new CAMM chapter, we can now apply even more pressure on their behalf.”

The Toronto chapter will take a few years to fully establish, Kim Thiara said, but she and the other board members are all firmly committed to it. “We have a lot of work to do and we’re anxious to get started,” she said. “We need to further establish key board members, pinpoint the issues that the Toronto-based moldmakers need addressed, increase the membership, and reach out to local politicians. We talked to a range of CAMM members in Toronto beforehand and they all agreed that a Toronto chapter was necessary; so if we can show them the value in it, we’re confident we’ll have their support.”

And there’s also a symbolism to the new chapter that suits the post-recession world, the board said. “The recession showed Canadian mold shops how vulnerable they were, and how much pressure they’re going to be under going forward,” said Russell Vardy. “They realize now that, although they’re competitors on one level, on a bigger, global level they’re all in it together; and that there’s strength in unity. That’s why the time has never been better for CAMM to expand.”