Will COVID-19 create a boom in factory automation?

One of the few bright spots to emerge during the COVID-19 pandemic is industrial automation, which is helping to maintain social distancing between plant floor workers. And it could trigger a lasting boom in factory robotics. 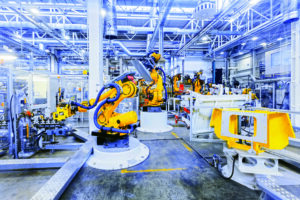 Economic disruptions tend to highlight and accelerate trends that were already underway. The COVID-19 pandemic is definitely proving more disruptive than a traditional recession – and maybe even the Great Depression – but in this respect it might not be different from other downturns. If so, the trend of manufacturers, plastics processors among them, using robotic automation to replace human workers in jobs that are dull, dirty, and dangerous – known in the industry as “the three Ds” – might not only accelerate, but become key planks in disaster contingency and supply chain planning going forward.

Although it’s far from over, the pandemic has exposed problems and risks that already existed for manufacturing enterprises, among them a heavy reliance in some factories on human workers. Manufacturers deemed essential during the pandemic are remaining open worldwide, but social distancing can pose challenges in a factory environment, and this has sparked calls for more industrial automation to keep workers safe from catching COVID-19. And the virus has also highlighted shortcomings in the automation sector itself, some analysts say. “Before COVID-19 struck, industrial automation was slowed by flat capital expenditure and declining industrial production,” said David Bicknell, principal analyst at consulting firm GlobalData Plc. “The virus has exposed the fact that despite the hype, advanced factory automation has not substituted human workers at scale. Technologies such as cloud-orchestrated AI for assembly line robotics have either been insufficiently developed or too difficult to use.”

So if a great crisis creates opportunity, this current pandemic could provide the impetus for a widespread rethinking of factory and warehouse automation.

Just as COVID-19 originated in China, the use of robotic automation as a response to the deadly virus also began there. As early as March, venture capitalists with expertise in the robotics sector – which has traditionally struggled to scale up in China – began anticipating orders from China to rise significantly this year, based on interest since the end of January when the virus started its spread. Perhaps one manufacturing sector has been an inspiration: despite widespread factory shutdowns in China as the outbreak grew, many Chinese semiconductor plants – including those located in the virus epicentre of Wuhan – remained open and running continuously due to their highly automated production processes. That interest has now gone global, and Canada provides some examples. Cambridge, Ont.-based ATS Automation Tooling Systems received a $65 million order in late April for two automated manufacturing systems that will produce components for COVID-19 test kits. ATS will design, build, and deliver the systems within the next four months to Tessy Plastics, a global contract manufacturer located in Skaneateles, N.Y. that specializes in injection molding and custom automated assembly solutions. The systems will enable production of 10 million units per month.

And as the need for more essential equipment arises, other manufacturing lines are being retooled across the country. Many suppliers and integrators have responded by ensuring faster turnaround times, like Saint-Nicolas, Que.-based supplier Robotiq, which is offering to deploy collaborative robot cells and software in under two weeks as part of its “Cobots vs. COVID” initiative, for companies making critical supplies or equipment to fight the pandemic that want to automate simple applications.

Robotiq’s initiative illustrates the fact that, depending on the end product, even the least complex automation solution might be enough to allow processors to maintain – and even increase – production while still adhering to COVID-19 social distancing guidelines. “People underestimate how much difference a basic top-entry, three-axis gantry robot can make to their production just by automating part takeout,” said Tim Lavinge, manager at Worcester, Mass.- based Absolute Robot Inc. “We’ve had customers double their productivity just by doing that alone. Processors don’t have to swing for the fences with new, plant-wide automation – especially during an economic crisis like this – they just have to pick the low-hanging fruit.” There’s enough sudden interest now in installing automation that some system suppliers are working hard just to keep up. “For the past six weeks, customers that we recommended solutions to six or eight months ago have been asking for immediate installations,” said Siva Krish, vice president of sales with Mississauga, Ont.-based automation supplier Proco Machinery Inc. “Because these projects were already in the pipeline we can handle them.”

But even as interest in robotic automation spikes upwards, the results are probably going to be uneven. Some types of manufacturing – car assembly, for example – generally already have a lot of physical separation of workers on the line; but goods manufacturing such as consumers electronics commonly use manufacturing cells, with workers crowded closely together. For these, the challenge for automation suppliers might be to design work processes and the flow of parts and materials to keep human workers away from each other to reduce infection risk. While some companies are using automation to help maintain social distancing on the plant floor, others are focusing on long-term projects for after the pandemic. “People are really starting to think about supply chain contingency and continuity, and a lot more companies are looking carefully at onshoring as a way of protecting themselves against supply chain interruptions like the ones we’re seeing during COVID-19,” said Peter Fitzgerald, general manager of FANUC Canada Ltd. in Mississauga, Ont. “If you’re looking to rapidly scale up your part making capabilities, automation is an enabler.”

In the longer term, automation will also certainly be part of many companies’ contingency planning – pandemic plans that, among other things, will recognize the health and operational risks posed by people working close together in a manufacturing plant. “I think guaranteeing social distancing in the factory will be a big part of disaster contingency plans going forward, and putting automation systems in place is key to that,” said Siva Krish.

At present, however, whether or not new customers embrace automation during the pandemic probably depends on which factor is stronger: the need to guarantee worker safety by restricting human contact or the need to balance the budget as sales go down. “I think many processors are struggling with being closed and/or distracted by supply chain issues, and probably aren’t considering automation right now,” said Peter Fitzgerald. “When the pandemic is finally over, they may ask themselves what they could have done differently, and that might lead to conversations about adding robotic automaton systems.”

In fact, some of these conversations are already taking place. “Many of the new accounts we’ve been talking to recently are showing interest in automating once the pandemic is over and they’ve started receiving orders again,” said Tim Lavigne. “They joke about how they wish they’d had these systems in place before, but they’re not really joking. At the very least, I think there will be long, hard looks at installing basic automation in most plastic processing plants, even if only putting simple sprue pickers on small presses to separate runners and parts.” But the first order of business for these plastics manufacturers is simply to weather the remaining COVID-19 storm. “The virus may now focus organizations’ minds on the need to automate faster in the medium term and will accelerate an investment in factory automation when the global economy eventually rebounds,” David Bicknell said. “But that will take a while.”