The surging Canadian dollar spells trouble for every Canadian plastics manufacturer with a stake in exporting, and poses yet another challenge to the industry as a whole. With the loonie expected to remain high through 2008, Canadian Plastics examines the impact so far, and also some strategies to weather this unprecedented economic storm. 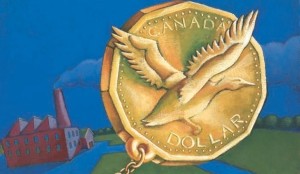 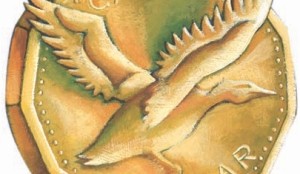 For most of us, the month of November marks little more than the unofficial beginning of another Christmas shopping season. Most Canadians, however, will long remember November 2007 for the dollar’s extraordinary surge, from the historic low of 61.5 US cents a little over five years ago, to above US$1.10.

This was a development that worried everyone with a stake in exporting. Despite speculation by some that a strong Canadian currency could prove to be good for Canada in the long run by fostering increased investment in machinery leading to increased productivity, for many of Canada’s plastics processors — especially those with significant connections to U. S. markets or a significant exporting market in general — the rise of the loonie late last year and its continuing volatility today pose immediate short-term threats to cash flow and profit margins, as well as to the ability to price products competitively on world markets.

Worse still, it comes on the heels of other long-term challenges, such as rising resin prices and increasing foreign competition.

The rise of the loonie may have been spectacular, but it did not come as a bolt from the blue. “We definitely saw this situation coming, and tried to adapt,” said the president of a Southern Ontario tooling service provider, who wished to remain anonymous. In the end, however, the unprecedented 25 per cent surge in the dollar happened so quickly that manufacturers simply did not have enough time to adjust prices or costs.

For many, the consequences have been dire. According to Gerry Fedchun, president of the Hamilton, Ont.- based Automotive Parts Manufacturers’ Association, the strengthening dollar has had a “decimating” effect on the already strained parts suppliers. “We have contracts that run for five to seven years until model changeover,” explained Fedchun. “You’ve got a confebruary tract, you’ve got a price in that contract, and you don’t have price adjustments.”

Fedchun noted that the parts business has been particularly hard hit because nearly two-thirds of the sector’s exports go to the domestic OEMs. And although manufacturers were already looking for productivity improvements, the velocity with which the dollar skyrocketed has made this more difficult.

Others in Canada’s plastics industry are also feeling repercussions. “There has been a huge impact so far in the tooling industry because, for us, Canada is a country of export,” said the tooling service provider. “In the past, we were getting orders — and making money in the process — because our price quotes were more attractive than those of our American competitors. Now, our competitiveness and attractiveness to foreign investment is shot.”

This tone is echoed by the spokesperson for a Southern Ontario injection mold shop that wished to remain anonymous. “Our business has definitely suffered a slowdown because of the rising dollar, and a lot of other processors are suffering as well,” he said. “Our profit margins are down and there are some projects that are not economically feasible to proceed with anymore.”

The dollar’s rising to parity with that of the U. S. isn’t necessarily their biggest challenge either, industry insiders say. Equally dangerous is the loonie’s continuing volatility. “The increase in the dollar followed by a decrease followed by another increase creates additional difficulties,” said Mark Lichtblau, corporate vice president of Toronto-based Haremar Plastic Manufacturing Ltd. “If there had been a straight line from under parity to above parity, more companies would be able to plan a strategy.”

There is general agreement that the rise of the loonie has served to highlight a longstanding weakness shared throughout much of the Canadian plastics industry. “Quite simply, too many Canadian manufacturers were spoiled, in that they thought they would always have an economic advantage over their American counterparts,” said the spokesperson for the injection molder.

There also seems to be agreement that the strengthening dollar probably will not, in and of itself, be the decisive factor for survival to most companies. “Many Canadian manufacturers

are already dealing with so many considerations and problems that the strength of the Canadian dollar is just one more,” said Haremar’s Mark Lichtblau. “Rather than differentiating a good year from a bad year, it’s one more dimension on top of other considerations.”

AN END IN SIGHT?

A key question for many of Canada’s plastics processors — and for the manufacturing sector in general — is how long the elevated dollar will last. “We expect dollar parity to continue for the first half of 2008, because the U. S. economy will remain weakened during this period,” said Dawn Desjardins, senior economist at RBC Economics Research, in Toronto. “Aggressive action by the Federal Reserve and an improved U. S. housing market should bring the Canadian dollar down to US$0.91 by the end of 2008, however.” According to Desdjardins, Canadian manufacturing is definitely being impacted by the strong Canadian dollar. “There were 33,000 jobs in the manufacturing sector in December 2007,” she said. “This undoubtedly reflects the fact that demand for export orders is waning.”

Also on the export front, Export Development Canada (EDC) analyzed the impact of foreign exchange fluctuations in 27 manufacturing industries, ranking them using three key factors: capital intensity, profit margins and import content share. Despite comparatively strong profit margins in the sector, plastic product manufacturers landed squarely in the middle. “The plastic products industry is not particularly advantaged when it comes to [foreign exchange spikes],” noted Peter Hall, deputy chief economist with EDC. “The plastic products industry is no better off but no worse off than the rest of the industries, so brace for a tough year because this isn’t going to be pleasant for anybody.”

FINDING SHELTER FROM THE STORM

The silver lining to this dark cloud might be that the companies weathering the storm will emerge stronger –and with a better strategy — than before. “This current situation is reinforcement that you always have to be competitive on both a North American and global basis because there is always change,” said Haremar’s Mark Lichtblau. “Any profit that a company takes in should be used for investment with the state of mind that we always have to be globally competitive.”

One key to surviving may lie in the simple realization that the old economic landscape, so beneficial to so many in Canada’s plastics industry, is probably gone for good. “Too many shops have the attitude that they will just ride out the storm and wait for things to return to the way they were, but that’s not going to happen,” said the tooling service provider. “This is the new reality and we all have to adapt to it.”

Manufacturers predict that developing product differentiation will be crucial to remaining profitable with an inflated dollar, just as it has been for confronting Chinese competition. “The days may be numbered for shops doing simple commodity-type work,” said the spokesperson for the injection molder. “Successful companies will have to differentiate themselves from the rest and reduce their competition base.”

One method for Canadian plastics manufacturers to set themselves apart involves investing in competitive technologies. Fortunately for these — as any cross-border shopper can attest — there has never been a better time to shop stateside.

“The funny thing is that a lot of the machinery and equipment we import into our products is either from the U. S. or sold in U. S. dollars, so Canadians enjoy a 35 to 40 per cent discount,” noted EDC’s Peter Hall. “That’s a bargain, and it’s also a way of increasing productivity and improving our global competitiveness.”

Dan Moynahan, president of the Windsor, Ont.-ba
sed Canadian Association of Moldmakers, echoes this sentiment. “Manufacturers should take advantage of the even dollar and buy some equipment, because there’s no better time to invest in technology,” he said.

Another important step, manufacturers say, is to create a leaner operation — an evolution that, in many shops, is already well underway as a means of remaining competitive against foreign competition. Further good news, according to the tooling service provider, is that going leaner doesn’t have to mean firing employees. “As happened when companies went to computerization, skill sets will have to change but jobs don’t have to be lost,” he said. CPL

Various levels of government in Canada have introduced measures to help the manufacturing sector after the dollar reached record highs late last year.

Meanwhile, the Quebec government announced in November that it would devote more than $620 million to the ailing sector, with manufacturers seeing $178 million in tax measures and $442.6 million in budgetary relief.

Quebec introduced a temporary refundable tax credit for manpower training, and raised the basic rate of the capital tax credit to 15 per cent of the amount of the eligible investment.

Ottawa’s decision to speed up a company’s ability to write-off capital depreciation has been helpful, plastics processors say, but other steps should have been taken…and sooner. “The government’s attitude was that since unemployment was down and the Canadian dollar was strong, there wasn’t a problem,” said the president of a Southern Ontario tooling service provider. “Ottawa should have exercised more control over the dollar, and also tried to control importation of foreign products to put things on an even playing field.”

The impact of the high dollar has been felt throughout the industry, and the plastics recycling sector is no exception.

In December, the Canadian Polystyrene Recycling Association (CPRA) has announced that it has suspended operations, and was seeking other alternatives to ensure the continued diversion of polystyrene from the waste stream.

The CPRA has dedicated itself to processing and marketing post-consumer polystyrene as recycled resins to North American manufacturers. The association noted that it has had to contend with high fixed costs, single material dependence, and blue box volumes that fell short of capacity.

Following Toronto’s decision to accept polystyrene in its blue box program in 2008, the association spent $300,000 on new sorting equipment in anticipation of higher volumes.

However, because plastics recycling is a North American market trading in U. S. dollars, the weaker greenback resulted in a 30 per cent decline in revenue for the association.

“Even though we had made a significant investment, we couldn’t hold on until Toronto’s volumes kicked in,” said Talkowski. “We became a victim to timing. We simply cannot continue to sustain the operation.”

The CPRA has suspended operations, and filed a Notice of Intention to File a Proposal. The association noted that it’s already working on an operation with a more competitive business model.

“Too many shops have the attitude that they will just ride out the storm and wait for things to return to the way they were, but that’s not going to happen… this is the new reality and we all have to adapt to it.”