Developed by researchers at the Laboratory of Cluster Catalysis at St Petersburg University, Russia, the synthesized polymers can be used for primary and secondary recycling. 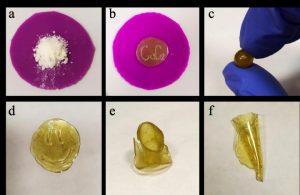 Just when you think there’s nothing new under the sun, someone comes along and creates something you haven’t seen before. And, these days, it tends to happen a lot in plastics recycling.

Researchers at the Laboratory of Cluster Catalysis at St Petersburg University, Russia have synthesized polymers from biomass – but what makes them different is that they can be easily recycled.

The new polymers are based on biomass compounds, with the key component being terpenols, i.e. compounds from natural alcohols. Among them are such well-known examples as menthol derived from the essential oil in mint; and borneol, a large quantity of which can be found in the essential oil in the white fir tree.

The synthesized polymers may well be used for primary and secondary recycling. During secondary recycling, the polymer-based products can be converted into the primary compounds. This may be further followed by polymerization. These polymers can be recycled at moderate temperatures.

“This can be said about recycling the materials based on our polymers: If they’re recycled without oxygen, we can get natural alcohols or their derivatives that can be restored to the same alcohols,” said Svetlana Metlyaeva, a researcher at the Laboratory of Cluster Catalysis at St Petersburg University. “And because they’re widely found in nature, they don’t harm the environment.”

The polymers of this type can be melted at about 120°C and shaped in another way, she said. When cooling, they become hard. Importantly, the chemists repeated this cycle seven times and concluded that the polymers, when melted more than once, did not change their properties.

The researchers are planning to continue their work at the Research Park at St Petersburg University. They will study the mechanical properties of the polymers, including resilience, elasticity, strength, and others. “What we have achieved so far is only the ability to synthesize these polymers,” Metlyaeva said. “Yet the properties of the polymer-based materials can vary. This depends on the way in which we synthesize them and what compounds we use. Now we have to modify the polymers themselves and the materials based on them. Then we will be able to talk about how we can use them.”