Researchers developing fully 3D-printed polymer spacesuits for Mars and beyond

A team from the University of North Dakota is using a $750,000 grant from NASA to develop the new flexible plastic spacesuits. 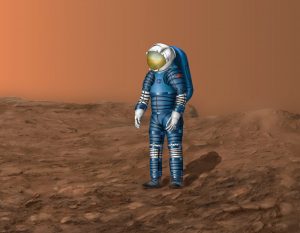 This conceptual image shows the aims of de León’s prototype project, in which nearly everything comprising the suit’s design will be manufactured in his lab on campus. Image Credit: Martin Demonte/UND Human Spaceflight Laboratory

From North Dakota to planet Mars is a leap few of us thought we’d ever see, but it might just happen someday thanks to researchers from University of North Dakota (UND).

Armed with a US$750,000 grant from NASA, the researchers are involved in a three-year project that uses 3D printing to design polymer-based spacesuit prototypes for use in travelling to Mars and beyond.

The research and development effort is being led by Pablo de León, Professor and Chair of UND’s Department of Space Studies, and is the third such grant that the university has received. Two previous NASA ESPSCoR grants supported the development of one of the nation’s few livable space habitat systems, the Inflatable Mars/Lunar Habitat.

De León hopes to produce a full 3D-printed spacesuit that could potentially “change the paradigm” in matters of extended, manned space exploration. “I’m somewhat going back to my roots of developing space suits, and now we’re using a completely new system that we developed in the lab,” he said. “We devoted the past year to making a lot of improvements in our techniques and methods, and NASA recognized that improvement. Now we are ready for action.”

The project will use a series of 3D printers capable of transforming plastics – in particular, thermoplastic polyurethane (TPU) – into flexible, durable materials suitable for space. A fully formed suit would need to be pressurized and resistant to the extreme temperatures and abrasive conditions associated with space travel and planetary exploration.

Most of the manufacturing will take place in the lab, according to de León, although NASA’s Marshall Space Flight Center in Alabama is home to the organization’s leading 3D printing experts, who are supervising the UND project. De León also plans to collaborate with UND’s own BiPed Lab, a motion-capture studio that will help the development team compare movement capabilities between conventional and 3D-printed suits.

A big benefit to using 3D-printed suits in space flight is the ability of astronauts to make their own in-flight repairs with an onboard 3D printer – or even print an entire new suit. “We’re trying to build a prototype spacesuit that could eventually be manufactured on Mars, or any other destination, thus cutting the dependence we have on today’s spacesuits,” said de León.

Manufacturing of this kind is regarded by NASA as “in situ resource utilization,” which means finding and using resources on other planets that allow for continued life and potential settlement by humans. While established space settlements are still a ways off, the material questions being addressed by de León are a key puzzle piece to moving forward.