Scientists at Tarleton State University have discovered that food-grade plant extracts from okra have the power to remove microplastics from wastewater. 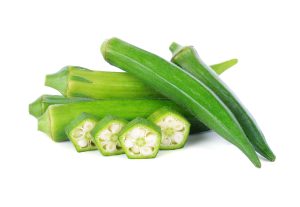 What do microplastics and the coronavirus have in common? They’ve both spread prolifically to every corner of the planet, and they’re both extremely unwelcome. The difference is, there’s a vaccine against COVID-19, whereas an effective cure for microplastics remains elusive.

Microplastics are small plastic pieces less than five millimeters long, and one reason why they’re proliferating nearly everywhere is because they enter the marine environment by escaping wastewater treatment facilities, which in turn leads – as numerous studies have shown – to people throughout the world unintentionally consuming tens of thousands of particles every year. A recent study by OrbMedia analyzed 159 water samples, sourced from both tap water and bottled water in 14 countries, and found that a whopping 82 per cent of all samples contained tiny plastic particles, with an average of 4.34 plastic particles per liter of water. “Microplastics were in drinking water sources regardless of wastewater and debris infrastructure,” the study concluded. And while microplastics themselves may not be hazardous to ingest, the substances that bind to them that could potentially be toxic or harmful to the body.

Microplastics are typically removed from water using two processes. The few that float are skimmed off the top, but the majority of microplastics are removed by adding flocculants – sticky chemicals that attract microplastics – to the water and waiting for them to form large clumps that sink to the bottom and can then be removed. The problem is, these binding substances are potentially harmful to the body, and some of the substances used as flocculants, such as polyacrylamide, can break down into toxic chemicals under certain conditions.

But researchers at Tarleton State University in Fort Worth, Texas, might have found a better way: they’ve discovered that food-grade plant extracts from okra have the power to remove microplastics from wastewater.

For the uninitiated, okra – also known as ladies’ fingers – is a flowering plant that’s used as a thickening agent in many cuisines, such as Gumbo, a stew from Louisiana; and it’s also a staple of cuisine in South Asia, where it’s called bhindi. According to Tarleton State University associate professor Rajani Srinivasan, who served as lead investigator for the project, the team was searching for non-toxic flocculant alternatives and found success with polysaccharide extracts from plants like fenugreek, cactus, aloe vera, tamarind, and the oft-slimy okra pod. It turns out that the same polysaccharides that cause okra to leave a sticky substance on your fingers when cutting and turn slimy when added to heat can also make great flocculants for cleaning water.

The researchers found that polysaccharides from okra paired with those from fenugreek could best remove microplastics from ocean water, whereas polysaccharides from okra paired with those from tamarind worked best for freshwater samples. Overall, the plant-based polysaccharides worked better than, or as well as, the traditional flocculant polyacrylamide, depending on the combination of extracts and water source. And importantly, the plant-based flocculants can be implemented in existing water treatment processes. “The whole treatment method with the non-toxic materials uses the same infrastructure,” Srinivasan said. “We don’t have to build something new to incorporate these materials for water treatment purposes.”

Srinivasan and her team will continue tailoring the ratios and combinations to optimize removal of different microplastic types from a variety of water sources. They also plan to scale up the removal process in field studies outside the lab. Ultimately, they hope to commercialize the method and remove microplastics from water on an industrial scale.