Developed by UCLA researchers, the biodegradable device keeps the extra white blood cells that surround a tumor in check. 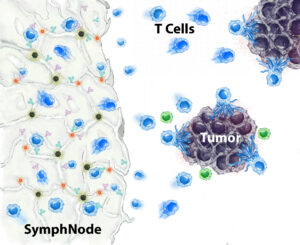 An interdisciplinary research team at the University of California, Los Angeles (UCLA) has developed a therapeutic sponge the size of a pencil eraser that’s been shown to boost the body’s tumor-fighting response in mice and keep the cancer from returning.

Called a SymphNode, the implantable biodegradable device is made from alginate, the same jiggly polymer used to thicken pudding, and works by keeping in check the extra white blood cells known as regulatory T cells, or Treg cells, that surround the tumor. Treg cells protect the tumor but they also play a critical role in safeguarding healthy tissues. Attempting to treat cancer by deactivating Treg cells can have serious consequences throughout the body by causing auto-immune conditions.

When surgically implanted directly next to a tumor, the sponge stimulates the body’s immune response against cancer by slowly releasing a drug that blocks the regulatory T cells in the tumor, while at the same time attracting and beefing up the T cells that kill tumors. The material that the device is made of resembles a lymph node, a welcoming setting for cancer-fighting cells, and has pores lined with antibodies that further activate those cells.

“Getting rid of regulatory T cells within the tumor seems to be transformative,” said team member Manish Butte, UCLA’s E. Richard Stiehm Professor of Pediatric Allergy, Immunology and Rheumatology. “Every solid tumor is crammed with these cells, and they’re why 91 per cent of cancer deaths occur from solid tumors. They’re probably limiting our ability to cure the cancer in the first place.”

The UCLA team tested the SymphNode in mouse models of both breast cancer and melanoma. With breast cancer, the device shrank tumors in 80 per cent of mice and prevented the spread of cancer in all of them; the researchers also found that placing a SymphNode next to one breast cancer tumor halted the growth of a second, simultaneous tumor at a different location in the body. In melanoma, the device shrank tumors in 100 per cent of treated mice, with tumors decreasing to undetectable levels in more than 40 per cent of cases. In both types of cancer, the treatment significantly extended the life span of mice, in many cases by more than twice that of untreated mice. Most promising, the researchers demonstrated mice whose breast cancer was treated with a SymphNode and survived also resisted the growth of a second tumor injected 100 days after the first, indicating that the technology may decrease the risk of cancer returning.

The team aims to make SymphNode available to treat human cancers in the future by licensing the technology to Symphony Biosciences, a company based at the California NanoSystems Institute’s Magnify start-up incubator on the UCLA campus. Symphony is currently developing a smaller, injectable version of the SymphNode, which the team envisions as a potential addition to chemotherapy or other first-step treatments for a variety of cancers. The company hopes to initially apply the technology to triple-negative breast cancer, an aggressive form of the disease that lacks targeted therapies. Clinical trials could launch as early as next year.