The wiring harness clips are also the first of many potential uses by Ford for recycled ocean plastics in a major vehicle platform. 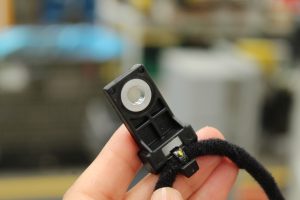 The part in the Ford Bronco Sport, which uses DSM’s Akulon RePurposed recycled material, has earned an Innovation Award from the Society of Plastics Engineers (SPE). The application was also recognized by Ford as the first of many potential uses for recycled ocean plastics in a major vehicle platform.

Ford uses wiring harness clips made of ocean-harvested plastic “ghost gear” in Bronco Sport models. Invisible to vehicle occupants, the wiring harness clips fasten to the sides of the Bronco Sport second-row seats and guide wires that power various features in the vehicle’s cargo area. According to DSM, Ford testing shows that the Akulon RePurposed material, despite having spent time in salt water and sunlight, is as strong and durable as petroleum-based clips.

The problem being tackled is that approximately 13 million tons of plastic waste end up in the world’s oceans each year. “Much of the waste culminates in the Great Pacific Garbage Patch, which covers an area twice the size of Texas and three times the size of France,” DSM said. “Abandoned fishing nets are a growing part of this problem, and the World Wildlife Federation estimates they account for as much as 46 per cent of the waste in the Great Pacific Garbage Patch.”

Akulon RePurposed PA6 was launched in 2018 to help address this challenge, DSM said.

“This is another example of Ford leading the charge on sustainability,” said Jim Buczkowski, vice president of research and Henry Ford technical fellow. “It is a strong example of circular economy, and while these clips are small, they are an important first step in our explorations to use recycled ocean plastics for additional parts in the future.”

The Akulon material is currently being used in a range of applications DSM said, including furniture, watches and surf boards, and numerous additional applications are currently under development.