A cool comeback in conformal cooling

Industry veteran Pat Zaffino and his team are back in business with a game changing conformal cooling technology for injection molds.

Everyone appreciates a comeback story, and Pat Zaffino’s is shaping up to be a good one. A 36-year industry veteran, Zaffino has returned to the tool and mold die industry with hard wire deposition technology that creates 3D metal objects on an existing 3D injection mold surface. “With this capability, we can now create conformal cooling channels on injection molds by means of a proprietary additive manufacturing technology,” Zaffino said.

Zaffino was formerly the owner of specialty welding company Tool-Tec Welding Inc., in Oldcastle, Ont. In 2005, he and his team at Tool-Tec began developing an additive manufacturing technology for welding engineering changes on molds and dies. “The mold industry has been around for a very long time and tungsten inert gas – or TIG – tool steel welding on molds has been a part of moldmaking for just as long,” Zaffino said. “By early 2008 our team of welding experts and electrical and software engineers had developed a technology to create 3D water lines on contoured mold surfaces. The process involved machining a slot or slots into a block of tool steel and testing on how to best bridge across the channel by applying the additive process to deposit weld beads placed in a precise sequence to minimize distortion of the channel and mold surface.” 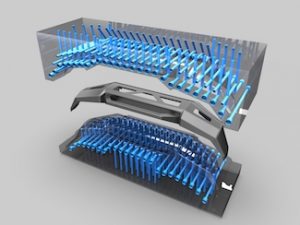 Above is a conventional mold with gun-drilled cooling passages. Photo Credit: Pat Zaffino 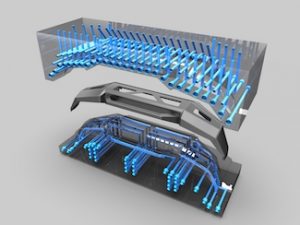 According to Zaffino, multilayer robotic deposition technology has documented repeatability and traceability that surpasses manual TIG welding. “The tool steel materials that are applied to the mold surface with the combination of pre-heat, welding wire, and post-stress relief provides a class A welding surface that’s very comparable to the parent metal,” he said. “Automating the hard-wire deposition process eliminates imperfections and any possible safety concerns.” The technology lets the customer implement conformal cooling on a range of part sizes such as an entire bumper, dashboard or wheel liner, as well non-automotive tooling. “We can produce conformal cooling circuits around contour surfaces at a fraction of the cost of other additive manufacturing processes,” Zaffino said. “The technology gives moldmakers options they never had before – by utilizing a combination of conformal cooling channels and conventional baffle water line systems, the mold surface can cool more uniformly and create more room on the tool to assist engineers and toolmakers in the design process.”

As part of the testing process, an OEM implemented conformal cooling channels in various tools for testing and found the results to be very promising. “One of the tests conducted on a bumper tool, using solely conformal cooling channels, resulted in improved mold cooling efficiency and cycle time reduction from 54 to 41 seconds, which is a 24 per cent cycle time improvement,” Zaffino said. “In other applications and testing, the combination of conformal lines and baffles showed similar outcomes.”

But a short time later the Great Recession arrived and Tool-Tec, like many smaller shops, shut down. Zaffino retained the patent applications for the additive/conformal cooling technology, but use of the patents was brought to a halt due to an intellectual property dispute between Zaffino and the afore-mentioned OEM, resulting in a United States Patent Office proceeding that involved three U.S. patent judges. After hearing and reviewing documentation from both parties, they decided the patents could remain with Zaffino.

Fast forward to April 2019, Zaffino launched his new company, Conformal Cooling Solutions Inc. (CCS), where he serves as operations manager. The goal of CCS, which is in Oldcastle, is to service the growing numbers of injection molders that have discovered the advantages of using conformal cooling channels. “The shape of some tooling parts has complicated areas where it may be difficult to place water in the conventional way of baffles, and this can cause hot spots,” Zaffino said. “Creating conformal cooling channels that follow the shape of the cavity and core promotes temperature uniformity in the plastic materials being molded, and molders that use this technology are seeing striking results: shortened cycle times, improved plastic part quality, and – above all – cost reductions.”

Conformal cooling is definitely a game-changer, Zaffino said. “Tool and mold companies can now build lifters, slides, and tooling inserts for their molds, but instead of straight water lines we can now machine channels that follow the molding surface,” he explained. “Laser sintering is a great additive manufacturing process that can create conformal cooling lines in the 3D-printed insert to a customer’s specification, allowing for the insertion of cooling in geometric designs that were previously not attainable – but laser sintering has size limitations. The technology developed by our team has no size limitations; it can be used with small tooling for the medical industry to larger tooling for automotive industry.”

The process developed and patented by Zaffino begins at the tooling design stage, where software such as MoldFlow analysis determines and calculates the best placement of conformal channels. “The channels are then machined into the part molding surface using the data during the block roughing stage,” Zaffino said. “The proprietary software reads the data of the paths, determines the correct offsets and buildup required, and then communicates this data to the robotic cell.” Next, Zaffino said, the tool is placed on a multi-axis table with pre-heating ability and brought to 400 Fahrenheit. “The robot then will orientate and pick up vertices on the tool and place itself in relation to the mold, whereby the system starts to apply the hard-wire deposition in a layer sequence to minimize distortion of the channel and mold surface.” The mold is then heat-treat normalized and sent to the mold company for finish machining.

Equipped with 11 patents, CCS is now on the lookout for tool and mold companies and injection molders that are open to the idea of a 25 to 40 per cent reduction in cycle time as well as decreased part distortion. “By reducing hot spots in tooling and improving cycle times, our conformal cooling technology is a good fit for automotive parts molders, but also adds value for consumer goods, aerospace, defense, and medical parts production,” Zaffino said. “We’re hoping to help bring more tooling programs back to be built in North America.”