Contaminants of emerging concern, found in sunscreens and plastics, end up in the St. Lawrence River

Once found in aquatic environments, UV absorbents and industrial antioxidants can harm the animals that live there. 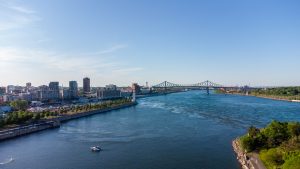 Ultraviolet (UV) absorbents and industrial antioxidants are contaminants attracting growing interest as they are found in a wide range of products that are used daily. These products include sunscreens, anti-aging creams and shampoos, and materials such as plastics and textiles, both domestic or industrial. Primarily, their use is to protect our skin and other consumer goods from the sun’s UV radiation or from naturally occurring oxidizing agents in the air.

Given their high versatility, there are several entry points for these contaminants into aquatic environments. Commonly targeted sources are municipal wastewater treatment plants’ effluents, since they collect water from routine domestic and industrial uses.

To improve the current knowledge of the Québec situation, I studied the evolution of these contaminants in the St. Lawrence River near Montréal during my master’s degree. With my colleagues, we present here the conclusions of this study.

From showers and garbage cans … to fish in the St. Lawrence River

Another source is plastic pollution, which enters the aquatic environment through direct dumping, for example when people leave debris on beaches. Indirect plastic discharge also occurs through their presence in the effluents of domestic wastewater treatment plants. As plastics degrade, for example through exposure to sunlight, salinity or the prolonged contact with waves, the compounds they contain (such as UV absorbents and industrial antioxidants) can migrate to the environment.

As soon as they enter the environment, these contaminants can disperse into sediments, water, and even among aquatic organisms, thereby harming biodiversity and ecosystem health. Indeed, some of these compounds are suspected of causing harmful effects, including disrupting the hormonal system in exposed aquatic organisms and promoting coral bleaching.

However, it is important to gain a better understanding of their distribution and evolution in aquatic environments in order to assess the current risk to species exposed to these contaminants.

Contaminants in the river

To better understand the fate of pollutants of interest in the St. Lawrence ecosystem, several types of samples were studied from upstream and downstream of the Montréal wastewater treatment centre. We collected water, suspended matter (which are insoluble particles visible in the water), sediment and tissues from two fish species, northern pike and lake sturgeon.

The analysis results found several contaminants, confirming their presence in the St. Lawrence ecosystem. In addition, affinity for suspended matter was observed, with higher concentrations for some contaminants, indicating the importance of improving our understanding of the risks associated with ingesting suspended matter. Indeed, the latter can be an important route of accumulation for organisms.

In comparing the dominant contaminants in the two fish studied, we observed a major difference between lake sturgeon and northern pike. This discrepancy can be caused by different factors, such as dietary differences between the two organisms. Northern pike is an opportunistic carnivore that feeds on what is easily available. Its main diet consists of yellow perch, suckers, sunfish and others.

In comparison, lake sturgeon is a bottom predator that feeds on small organisms such as larvae, crayfish and small molluscs. This difference in lifestyles leads to a difference in the way the organisms are exposed to pollution and therefore the extent of contamination by certain pollutants. For example, if a contaminant has a greater affinity for sediment, organisms living near the bottom may be more affected by it.

Some contaminants are of greater concern than others

The results also show that BHT, an industrial antioxidant, and its breakdown product, BHTQ, were the only compounds found in the brain of northern pike. The effects of these contaminants on the nervous system of aquatic organisms are not well known at this time. An earlier study, however, demonstrated that BHT can accumulate in the rat brain and can lead to an increase in the number of dead cells. To our knowledge, this is the first finding of these toxic compounds in the St. Lawrence.

Found mainly in plastics and paints, UV328 is a molecule of international interest monitored by the Stockholm Convention for its damaging effects on the liver and its potential for hormonal disruption. Its presence has been detected primarily in lake sturgeon, water, suspended matter and sediments of the river.

More gaps to be filled

The study highlighted the presence of contaminants of interest in the St. Lawrence River and identified UV328 and BHT as being of greater concern. On the other hand, there is still insufficient knowledge to understand the impact of these contaminants on the various organisms living in the St. Lawrence, particularly in terms of the effects of long-term exposures.

Moreover, it is important to remember that aquatic organisms are subject to a mixture of several pollutants and that it is therefore essential to have a better understanding of the consequences of their interactions on the health of organisms.