The founder and president of Cambridge, Ont.-based material supplier Canuck Compounders Inc., Bill Dickson has been dedicated to sustainability since long before it was cool. 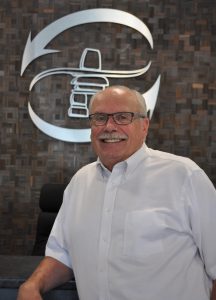 With the advent of radar at the outset of World War Two, the race was on to design a warplane that was undetectable by the revolutionary new range-finding technology. Which is when flying under the radar became invaluable. In the business world, however, this same principle has been around for a lot longer. By quietly building stellar products and garnering loyal audiences without stepping on the toes of the majors, small and mid-size firms have provided their best products while protecting themselves from retaliation.

Bill Dickson can definitely relate. The founder and president of Cambridge, Ont.-based Canuck Compounders Inc., Bill has been walking that fine line for 40 years now, growing the custom compounder’s business, expanding its customer base, and adding ever-more resins to its product offerings without attracting too much adverse attention from the global material suppliers.

But after a career spent avoiding the spotlight, the spotlight has now, finally, found him: Bill has been named as the Canadian Plastics Industry Association’s Leader of the Year for 2019.

WORKING HIS WAY UP

Bill began his career in plastics compounding at the age of 18, working part-time on a plant floor while going to school. He worked his way up through the ranks to full time, and then on to supervisor and management. In 1979 he left his management position and founded Canuck Compounders; in 1986 he consolidated the company and became its sole owner. From the start, Canuck Compounders relied on 100 per cent post-industrial and post-consumer sourced material that it transformed into higher value materials for high-end products. “After the founding of the company we began to formulate various PE resins into various products for both the retail hardware business as well as the construction industry,” Bill said. “As we evolved over the years, we became more diverse, adding PS, ABS, and PC alloys to our offerings.”

He also added that the company owes a real debt to Ford Motor Co., Product Development Engineering for its continued support and efforts to incorporate Canuck Compounders’ recycled resins into well over a million vehicles over the past year. “This has been a great accomplishment, to take this MIC Class A product from concept to reality,” Bill said. “It’s a great step in the OEM’s effort to increase its usage of recycled materials, and was also recognized in the SPE Innovation Awards for Sustainability.”

The move into servicing the auto market also brought with it a valuable early lesson. “We began supplying more and more of a custom recycled compound to a particular automotive parts molder that had traditionally been a customer of a global material supplier,” Bill said. “When the prime resin supplier found out what was going on, it moved in and stomped on us – it offered a copycat material at the same price and took the customer away from us completely. It taught us the dangers of becoming too aggressive against a major prime material supplier, and we’ve never made that mistake again.”

Bill’s own role within the company has been adjusted over the years as well. “I hired a vice president of operations five years ago and – along with the assistance of my daughter Temi, who also works for us – life has been a lot easier and allowed me to shift roles,” he said. “Nowadays I’m far more involved with marketing with my sales people as to where we want to go and what we want to do – weeding out new business offers and deciding which ones to pursue. Another of my top priorities is spending time with my procurement people, looking for new waste stream supply; and when we find a new supplier, I get involved because having a good, steady supply of recyclable materials is just as important as gaining a new customer. My ideal waste stream supplier would give me one to three truckloads of the same material every week.”

In other ways, however, Bill’s management style hasn’t changed at all. “I’ve always been hands-on and I remain that way today,” he said. “If I’m in the office on a given day I’ll walk through the plant that morning,” he said. “I want to see how full the plant is, I want to talk to people on the floor – we have 45 workers at present, and many have been with the company for more than 20 years.”

One aspect of Canuck Compounders’ business that has never needed readjustment is its dedication to sustainability, which the company has been pursuing since long before it became a thing. “Sustainability has always been the key to our business,” Bill said. “Every formulation we create is done so with the use of as much recycled material as possible. Over the years we have installed more and more equipment to allow us to maximize more recycled material in our operation. We’ve processed hundreds of millions of pounds of recycled resin and continue to do more each year.”

But despite what you might read and hear, this dedication to sustainability isn’t universal – indeed, it’s often more talk than walk. “Many companies that talk about recycled material only want it if you can give them a better price than products made with prime resins – if not, they’re walking away,” Bill said. “Using recycled material is still a business decision dictated by profit margins, and I see this in every new project I take on: If I’m not saving the customer enough money, they don’t want to talk to me. When prime pricing is high, recycled resins flourish, but when prime pricing is low, manufacturers back away from using recycled content. We need the day to come when, given the same value proposition and the same price, the sustainable resin will be the first choice.”

As a career recycler, Bill is uniquely positioned to see the reality of the problem of plastic waste – and also to see past a lot of the anti-plastics hype. “Ocean contamination has brought the plastic waste issue to the forefront – and it’s a legitimate problem – but the vast majority of it comes from Asia while the North American plastics industry gets the blame,” he said. “What most people don’t realize is that even single-use containers are great products – they represent a very low carbon footprint, preserve food products, and are 100 per cent recyclable, low-cost, and can be FDA-approved for use in food and medical products. We need to be able to create an economical way to get a much larger percentage back into the waste stream to be recycled.”

One possible answer to the problem of plastic waste and the negative publicity it generates, Bill believes, is more government legislation. “As long as there is prime virgin resin in the marketplace at lower pricing than recycled resin it will be difficult to get more of this product back to the recyclers without legislation in place to demand a certain recycled content,” he said. “But, at the moment, government isn’t doing its job in this respect – they don’t want to pay for blue box collections anymore, they want businesses to take on that responsibility by paying more for recycled material, but that won’t happen if the margins aren’t there and if there’s no requirement for brand owners and OEMs to utilize recycled resins.”

There are other, smaller problems that – under Bill’s guidance – Canuck Compounders can help solve. “We actively participate in many local fundraising efforts in the community,” he said. “Every year we support the United Way, the Cambridge Memorial Hospital, the local food bank, and we also support the YMCA’s Small Steps to Success program; Monica House, which provides support for pregnant women and young parents; and the Nutrition for Learning programs at local schools.”

Aside from the misstep with the global material supplier aside mentioned above, Canuck Compounders has always been – and remains – conservative in its style. “We’ve grown over the years but we’ve always kept it under control,” Bill said. “We have a very substantial line of credit that we almost never use, for example, but it’s necessary because OEMs need to know that cash isn’t an issue. For new waste stream suppliers who are unfamiliar with us, I will initially pay them within 10 to 15 days to build their confidence; this matters because a big question in the recycling business for a new supplier is, am I going to get paid for selling you the recycled product? This isn’t a problem with us.”

Although he was initially surprised at having been selected as CPIA’s newest Leader of the Year, Bill is at ease with his turn in the spotlight – with one caveat. “I’ve got great people working with me at Canuck Compounders,” he said. “They’ve elevated me to where I am today, so they share in this award as much as I do.”

Which means that the whole company is now suddenly on the radar screen.