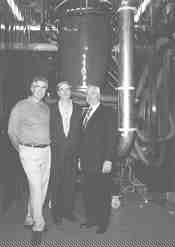 A new Davis-Standard blown film system has improved roll flatness and gauge uniformity while simultaneously increasing output at Montreal-based Imaflex Inc. The new machine brings Imaflex’s total production rates to more than 30 million lb. per year. Imaflex is a major supplier to the converter market and continually strives to improve film thickness variability and wound roll quality. The company’s success in doing so is illustrated by its reputation as a reliable intermediary film supplier and recognition as one of Canada’s top 200 growth companies in 2000.

“Our business is focused on supplying top-grade rolls of film to the converter market,” says Imaflex president Joseph Abbandonato. “Our customers know that we stand behind our products and are committed to servicing their account.”

The EPIC control’s open architecture and third party control assimilation make it possible for Imaflex to interface all components, permitting full process control and monitoring through operator-friendly touch screens. The system’s design coupled with the reliability of the EPIC control enables Imaflex to achieve output rates of 1000 lb./hr.

“Generating and delivering a homogeneous and uniform melt flow from the extruder, die and air ring is the first step to achieving the quality required by our customers,” said Gerry Phelps, vice-president of engineering at Imaflex. “We felt Davis-Standard’s feed screw and die technology would best accomplish these requirements.”

Imaflex has also been pleased with the performance of the WesJet air ring, which has provided excellent gauge uniformity. According to Phelps, gauge profiles of three to five percent are consistently attained when running a broad range of materials including EVAs and metallocene LLDPE polymers. Operators can detect when films are off-gauge by using the system’s gauge monitor and immediately correct the process. Gravimetric control of the extruder and an automatic nip roll speed adjustment maintain a target weight per length, guaranteeing a film yield to customers within one percent.

Imaflex, which manufactures a variety of specialty, single layer polyethylene films, is using the new system to supply films to converters servicing the food packaging industry.

One of the unique features of this system is the ability to replenish the label magazines while the machine is in full operation. Bekum has installed more than 40 double station blow molding machines with IML.

The C-30 is the first new blow molding machine for polycarbonate water bottles introduced since Graham Machinery Group acquired two companies specialized in the industry during 2000.

Sister companies m-form and m-mold will be presenting at K 2001 an injection molding cell that produces eight cellular phone shells in a 4+4 stack mold with a cycle time of less than five seconds. The molding cell was developed in connection with Demag Ergotech and Neureder AG.

The stack mold developed by m-mold can be maintained and dismantled while still in the injection molding machine. The mold inserts are mounted as cassettes on the base plates of the system. According to m-mold, this offers considerable system and operating cost advantages.

The emphasis of this production cell is to demonstrate how integrated solutions can contribute to efficiency. At K, m-form is presenting needle shut off techniques and hot runner technology. Optimal process runoffs and low pressure on the melt up to the injection point are decisive in determining molded part quality, the company reports.

For molders needing to operate at higher injection pressures and temperatures than current machine barrels allow, Xaloy has a solution. New Xaloy X340 barrels can withstand pressures up to 3000 bar (43,500 psi) at temperatures up to 450 C.

A form-cut-stack thermoforming machine driven entirely by electric motors will be introduced by Meico at K 2001. Capable of both vacuum and pressure forming, the FCS 750 E machine has a forming area of 750 mm x 530 mm (29.5 in. x 21 in.). It is suitable for medium production quantities and rapid tool change.

Benefits of the electric machine are said to be fast cycles, low noise levels and reduced energy consumption.

The base model includes double independent heater banks with proportional heating zones, top and bottom independent moving platens on both forming and cutting stations, and a stacker unit with counting and ejection.

New grades of Rhodia’s Technyl and TechnylStar polyamides are set for commercialization during the K 2001 show. Technyl A218 G1 V 30 and A218 G2 V 30 are designed to provide long-term resistance to all forms of glycol and have higher resistance to allow the resins to accommodate the projected future increase in cooling system operating temperatures. Both will be available in 25 percent and 30 percent glass reinforced versions.

As a replacement for paper bags for use in fast food and retail consumer markets, coextruded film of high molecular weight high density polyethylene (HMW-HDPE) with low density (LDPE) and linear low density (LLDPE) achieves a combination of properties not attainable by blending LLDPE or LDPE with HDPE, states Equistar Chemicals.

The optimum coextrusion to meet a balance of stiffness, tensile, tear, puncture and optical properties has a core (80%) of HMW-HDPE, according to the company.

These findings were presented in a technical paper written by Leonard Cribbs of Equistar. Specific data can be found at www.equistarchemicals.com.

Black Pearls 4890 is a high jet carbon black from Cabot designed for coloring polycarbonate and its alloys. A new encapsulation process has been applied to the carbon black, providing superior pellet quality and greater compatibility with PC resins. The result is higher aesthetic, physical and coloring performance.

Ampacet has developed an ingenious solution to the problem of rodents and other pests gnawing and chewing on plastic wiring, fiber optics, pipe, containers, and outdoor furniture: a bad-tasting additive.

The additive is highly concentrated and the taste is recognizably bitter at 50 parts per billion.