Canadian companies may not have been among the most numerous exhibitors at the K 2019 trade show in Düsseldorf in October, but they made an impact. From the Great White North direct to western Germany, here’s a look at some of the made-in-Canada developments and technologies unveiled at the big show.

An oft-mentioned hallmark of German culture is its efficiency, but that doesn’t mean they always get everything right. They spell Canada with a “K”, for example. But when it comes to Canadians at the K show — known as the world’s number one trade fair for plastics — maybe it’s appropriate. The show, which ran from Oct. 16 to 23 in Düsseldorf, featured 3,330 exhibitors from 63 nations, including about 20 from Canada. Not an overwhelming number, perhaps, but it included some — GN Thermoforming Equipment, Husky Injection Molding Systems Ltd., Nova Chemicals Corp. — with among the largest booths at the event. And large or small, they all made their presence felt. Here’s a look at some of the made-in-Canada developments and technologies unveiled at K.

FROM CANADA TO INDIA, VIA GERMANY

Blown film equipment maker Brampton Engineering Inc. used the K show to announce a new deal in India, which has a rapidly growing packaging sector and is one of the most sought-after barrier film manufacturing markets in the world. Multilayer film maker Vishakha Polyfab will become the first processor in India to add Brampton Engineering’s AquaFrost water-quenched blown film technology. Vishakha Polyfab has been a long-time Brampton Engineering customer, the firm said, installing India’s first seven- and nine-layer barrier blown film line. With the addition of the water-quenching system, the company will be able to improve film clarity and thermoformability, balance orientation, and increase processing versatility with fewer resins. “We’ve worked with Vishakha Polyfab for almost 20 years in supplying equipment solutions to address their needs,” said Brampton Engineering’s vice president David Kerfoot. “Our close collaboration has enabled us to grow together and advance multilayer film technology in the region. We look forward to their continued success in leading the film packaging market in India and beyond.” Brampton Engineering is a Davis-Standard LLC company. 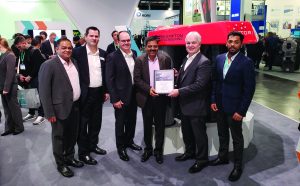 GN Thermoforming, a maker of servo-driven, roll-fed thermoforming machines for plastic packaging, launched its new form/cut/stack GN580 thermoformer, a smaller version of the company’s GN800 machine, and designed for food, medical, and industrial packaging markets. The GN580 machine shown at K — which was already sold to a Central European packaging manufacturer — ran 100 per cent post-consumer recycled PET with a common-edge tool, producing meat trays with minimal scrap. “The most distinctive features of the GN580 are the high degree of automation as well as the ease of tool change,” said Paul Phillips, the company’s sales and marketing manager. “The GN580 also has a forming area of 580 mm by 465 mm and a cycle time of 45 cycles per minute at full stroke, and the machine forms 120 mm deep parts above and below the sheet line.” It also features an operator-friendly HMI with integrated diagnostics and remote connection, an energy recovery system incorporated in all drives, and maintenance-free precision roller bearings in the toggles, Phillips continued. “While the GN580 offers many of the same features as our GN800, it’s well-suited for unique production runs and has a smaller footprint for factories where space is a challenge,” he said. “The GN580 offers additional options suited to specific requirements, and it can be further customized for certain applications. And the thermoformer provides additional flexibility by accepting tools from many of our competitors’ machines.”

Husky showed off its new HyPET HPP5e system, described as an intelligent, adaptive technology that uses feedback from pressure and actuator sensors to determine the optimum pressure required to mold every application, and which is designed to deliver better energy savings, system reliability, preform quality, and user-friendliness. At the show, the system produced preforms made from 100 per cent recycled PET. The company also introduced its new NexPET Mold, which it describes as a flexible mid-volume PET preform tool for shorter production runs and frequent changeovers. In hot runners and controllers, Husky’s booth included Ultra Helix 250 T2 valve gates, which the company said are designed to improve part quality by maintaining superior gate quality for millions of cycles for small parts with difficult-to-access gate locations. On the control side, Husky displayed the latest family of its Altanium mold controllers; according to Husky, these provide highly accurate temperature management with integrated servo-motion and valve gate controls. Husky also introduced its new online spare parts ordering portal, which was available for a demonstration on the booth.

Material supplier Ingenia Polymers Corp. highlighted the three product lines of its new InCircle technology. First up is InBio, which are biopolymer-based materials designed to support the applications growth of polymers such as PLA, PHA, and bioPET. “The InBio materials use biopolymers as a carrier resin, and allow our customers to be able to do trials with a 100 per cent bio-based structure for the parts they’re trying to make,” said Dale McCormick, Ingenia’s business manager for proprietary products. Second is the InHance technology, which are upcycling enabling products designed to support recyclers in their efforts to enhance reprocessed polymer material properties. “We’re looking to support recyclers that are taking material from film processors and turning it into pellets for resale,” McCormick said. “We’ve developed a range of products under this brand, including a new compatibilizer to allow for the compatibilization of PE with nylon and/or EVOH. And for recycling within a film extrusion plant where the customer wants to reuse film they’ve generated in their own facility, they can add an InHance stabilizer before the film gets turned into pellets, to retain key mechanical and optical qualities.” And third, the recycle-friendly InAble technology is designed to enable film structures that contain high levels of recyclate resin, functional additives, or pigments derived from recycled sources, and are themselves more easily recycled. “This product line is designed to support our film customers in their efforts to use more recycled content, whether it’s post-industrial, post-consumer, or recycled content from the masterbatches,” McCormick said. “This product line includes modifiers that allow film makers to use zero virgin resin in their film structures and go with 100 per cent reprocessed material recipes.”

Mold Hotrunner Solutions Inc. (MHS), part of the Las Vegas, Nev.- based Westfall Technik Group (WTI) since 2018, presented its M3 micro injection molding machine in co-operation with WTI. Until now, MHS said, injection molding of micro-components was often only possible with what it calls “enormous amounts of waste” through the needed cold runner. “Conventional approaches require considerable compromises in terms of part quality and scalability,” the company continued. But the technology developed by MHS redefines the possibilities in the growing field of micro injection molding — the Isokor technology of the M3 enables direct injection of microparts without a cold runner. “The M3 technology is a real breakthrough and, at the same time, an important milestone in terms of precision injection molding,” MHS vice president Harald Schmidt said. “We see the M3 as a game-changer, and are pleased with the advantages it brings.”

Material supplier Nova used the K to introduce several new technologies, including a suite of recycle-ready octene and butene LLDPE resins for packaging applications. VPs412-A is an octene PE sealant with high caulkability for fast sealing and fast setting; VPsK914-A/C is an ultra-durable octene PE performance sealant for highspeed packaging lines; SPsK919-C/F is an abuse-resistant octene PE resin for heavy-duty applications; SPs116-C/D is an all-purpose, ultra-versatile performance octene PE resin designed to replace conventional mLLDPEs; FP120-CE is an octene PE resin with high toughness and strength as well as easy processability; FG220-A is an octene PE resin with exceptional toughness for cast film; and PF-0118-FL is a butene PE resin with good toughness and strength over conventional butene LLDPEs. “Used in their virgin state, the resins compensate for the often degraded physical performance of recycled content in film structures, suppressing odour by up to 80 per cent and improving optics by up to 15 per cent,” Nova said. “When repurposed multiple times through mechanical recycling, the resins retain or improve their key physical performance properties, enabling reuse in applications such as stretch film, stand-up pouches, multipack collation shrink, and heavy-duty sacks.” Nova also launched version 4.0 of its Bonfire film development platform, adding three new modules to better enable film designers to “virtually” build complex multilayer film structures and then predict their performance properties. “The platform allows film producers and converters to narrow their options when developing new structures and applications before they’re manufactured, reducing the number of physical trials and interruptions to commercial production required,” said Dan Ward, Nova’s technical service specialist. “The three new modules include a rheology module that helps users understand how resins in a prototype film structure will flow in a multilayer film die under specific conditions by predicting viscosity, shear stress, and stress ratio; the second is a blends calculator that predicts the properties of an individual film layer composed of multiple materials, including resins and additives; and the third — called Bonfire Academy — is an interactive library of educational materials that enables users to learn more about the range of materials, processes, and testing protocols involved in the formulation of complex multilayer film structures.”

Injection moldmaker StackTeck Systems Ltd. made a big announcement at K: a new initiative for automation with a team to facilitate customer projects for IML and other packaging applications in a new facility in the Toronto area. The new plant will be dedicated to robotics engineering, assembly, test and injection molding systems integration. StackTeck has an existing IML pilot cell that uses a dedicated IML robot with a 300 ton injection machine for prototyping and sampling new IML products. This new initiative for IML robots is based on a proven design that will now be assembled in Canada as of mid-2019, which will be offered with short lead times and competitive pricing. Initial efforts for this new business will be focused on IML applications for the Americas, StackTeck said, but longer term plans are to serve a broad range of automation systems on a global scale. John Pocock is leading the new team as general manager. “I’ve been supplying IML robots for StackTeck molds over the past couple of years,” Pocock said. “In a short time period, for one particular customer, we’re now up to seven IML systems, including stack mold systems for both containers and lids. We see a niche in North America, where customers are looking not just for system integration but to have the moldmaking and automation design teams meeting face-to-face and working closely together to tackle specialty technical challenges.” 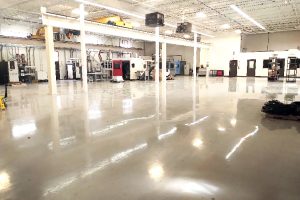 In the end, you could almost say these Canadian firms succeeded in putting the “K” in Canada, at least for the duration of the show.