University of California, Berkeley, scientists have invented a way to make compostable plastics break down more easily, with just heat and water, within a few weeks. 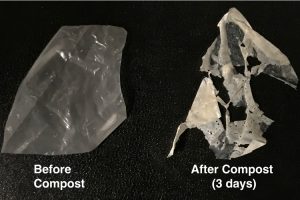 Biodegradable plastics are being trumpeted as solution to the plastic pollution problem, but there’s a catch: today’s compostable plastic bags, utensils and cup lids – made primarily of the polyester known as polylactic acid, or PLA – don’t break down during typical composting, potentially lasting as long as traditional plastics.

But now, scientists at the University of California, Berkeley, have invented a way to make compostable plastics break down more easily, within a few weeks, with just heat and water.

Led by Ting Xu, UC Berkeley professor of materials science and engineering and of chemistry, the scientists created a process that involves embedding polyester-eating enzymes in the plastic as it’s made. These enzymes are protected by a simple polymer wrapping that prevents the enzyme from untangling and becoming useless. When exposed to heat and water, the enzyme shrugs off its polymer shroud and starts chomping the plastic polymer into its building blocks – in the case of PLA, reducing it to lactic acid, which can feed the soil microbes in compost. The polymer wrapping also degrades.

A key innovation of this new process was finding a way to protect the enzyme from falling apart, which proteins typically do outside of their normal environment, such as a living cell. Xu designed molecules called random heteropolymers, or RHPs, that wrap around the enzyme and gently hold it together without restricting its natural flexibility. The RHPs are composed of four types of monomer subunits, each with chemical properties designed to interact with chemical groups on the surface of the specific enzyme. They degrade under ultraviolet light and are present at a concentration of less than one per cent of the weight of the plastic — low enough not to be a problem.

Xu and her team used a similar technique, enshrouding the enzyme in RHPs and embedding billions of these nanoparticles throughout plastic resin beads that are the starting point for all plastic manufacturing. She compares this process to embedding pigments in plastic to colour them. The researchers showed that the RHP-shrouded enzymes did not change the character of the plastic, which could be melted and extruded into fibres like normal polyester plastic at temperatures around 170°C or 338°F.

Using this new process, 80 per cent of the modified PLA fibres degraded entirely within about one week at room temperature. Degradation was faster at higher temperatures. Under industrial composting conditions, the modified PLA degraded within six days at 50°C or 122°F. Another polyester plastic, PCL (polycaprolactone), degraded in two days under industrial composting conditions at 40°C or 104°F. For PLA, Xu embedded an enzyme called proteinase K that chews PLA up into molecules of lactic acid; for PCL, she used lipase. Both are inexpensive and readily available enzymes.

The process also eliminates microplastics, a by-product of many chemical degradation processes and a pollutant in its own right. The scientists said that up to 98 per cent of the plastic made using Xu’s technique degrades into small molecules.

And the new technology should theoretically be applicable to other types of polyester plastics, perhaps allowing the creation of compostable plastic containers, which currently are made of polyethylene, a type of polyolefin that does not degrade. Xu thinks that polyolefin plastics are best turned into higher value products, not compost, and is working on ways to transform recycled polyolefin plastics for reuse.

But there is still work to be done. Xu is currently developing RHP-wrapped enzymes that can degrade other types of polyester plastic, but also is modifying the RHPs so that the degradation can be programmed to stop at a specified point and not completely destroy the material. This might be useful if the plastic were to be remelted and turned into new plastic.

Xu said that programmed degradation could be the key to recycling many objects. “Imagine using biodegradable glue to assemble computer circuits or even entire phones or electronics, then, when done with them, dissolving the glue so that the devices fall apart and all the pieces can be reused,” she said.