The companies are taking their joint venture chemical recycling project in Edmonton to the pilot scale. 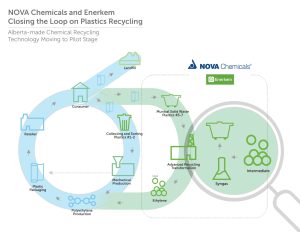 Canadian firms Nova Chemicals Corp. and Enerkem Inc. are taking their chemical recycling technology to the pilot stage in Edmonton, Alta., with assistance from $4.5 million in funding from the Alberta Innovates Technology Innovation and Emissions Reduction Economic Recovery Program.

The collaboration between the two firms dates back to 2020, when they first partnered to collaborate on developing technology to turn non-recyclable and non-compostable municipal waste into ethylene, a basic building block of plastics.

In an April 13 news release, Nova and Enerkem officials said that this most recent round of funding enables the companies to continue construction of a pilot-scale reactor system that converts syngas produced from used, non-recyclable and non-compostable plastics to feedstocks for virgin-grade plastics.

“By taking waste streams that are otherwise non-recyclable, we can complement mechanical recycling efforts and provide an important solution to close the gap between recycling targets and the important role plastics play in our daily lives,” said Michel Chornet, Enerkem’s executive vice president, engineering, innovation and operations. “The project aims to expand the types of materials that can be recycled and increase recycling rates while reducing emissions from incineration and landfill and keeping plastic out of the environment. It is a significant step in realizing the vision of the circular economy.”

The project leverages the gasification expertise of Enerkem and Nova’s petrochemicals and plastic manufacturing experience “to position Alberta as a world leader in the development of a circular economy by diverting waste from landfills, creating value-added products, and reducing greenhouse gas emissions,” the release continued.

With the current plastic recycling rate in Canada at less than 10 per cent, the successful implementation of this technology in Alberta could reduce local CO2 emissions by approximately 165,000 metric tons of carbon waste per year, the companies said, while also diverting 230,000 tonnes of waste (including over 100,000 tonnes of mixed plastic waste) per year from landfills.

Material supplier Nova is headquartered in Calgary, and Enerkem – which produces low-carbon intensity biofuels and circular chemicals from waste materials – is based out of Montreal.