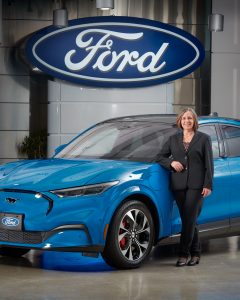 Ford Motor Co. of Canada Ltd. has promoted Bev Goodman, a 25-year veteran of the Oakville, Ont.-based automaker, as its new president and CEO, effective immediately.

Goodman replaces Dean Stoneley, who will be appointed to the newly created position of general manager, North America truck, at Ford Motor Co.

Goodman began her career at Ford of Canada as a finance intern and she has spent 25 years in a variety of roles at the automaker including finance, parts and service and sales and marketing.

She most recently was Ford of Canada’s director of marketing communications.

“At this time of rapid change in the auto industry, Bev demonstrates a deep understanding of what matters most to our customers now, and in the future,” Kumar Galhotra, Ford’s president of the Americas and International Markets Group, said in a statement. “She also has a proven track record of working collaboratively with our dealer partners and a commitment to innovation as Ford accelerates its efforts to deliver high-quality, high-value vehicles and services.”

Ford employs 7,000 people in Canada, while an additional 18,000 work in more than 400 Ford and Ford-Lincoln dealerships.

The automaker announced in September that it would spend $1.95 billion in its Canadian plants, including $1.8 billion toward the production of electric vehicles in Oakville, Ont.