The TCF Center, where the event was to have been held in June, will likely be repurposed into a temporary field hospital in preparation for the increased need for urgent health care during the COVID-19 pandemic. 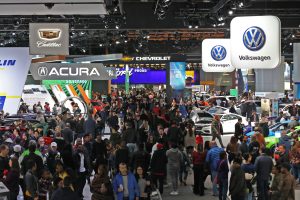 The North American International Auto Show (NAIAS), originally scheduled for June at the TCF Center in Detroit, has been cancelled amid the worsening COVID-19 pandemic.

The TCF Center, formerly the Cobo Center, will likely be repurposed into a temporary field hospital in preparation for the increased need for urgent health care.

“Although we are disappointed, there is nothing more important to us than the health, safety and well-being of the citizens of Detroit and Michigan, and we will do what we can to support our community’s fight against the coronavirus outbreak,” NAIAS executive director Rod Alberts said in a statement. “With the more than 100 convention centers and facilities around the country being considered to potentially serve as temporary hospitals, it became clear to us that TCF Center would be an inevitable option to serve as a care facility to satisfy our community’s urgent health needs.”

NAIAS will hold its next annual show in June 2021. 2020 NAIAS chairman Doug North said show officials are also discussing plans for a fundraising activity later this year to benefit the children’s charities that were designated as beneficiaries of the 2020 Charity Preview event.

“We know these organizations rely on the money raised at Charity Preview to fund many wonderful support services for the most vulnerable in our community,” North said. “With this in mind, we will be in touch with the charities in the near future to present some ideas.”