In total, 87% of overall waste generated at the show was recycled.

There was a “dramatic” rise in the amount of plastics scrap material collected for recycling at the recent NPE2015 trade show, according to show producer SPI.

“At NPE2015, 82 exhibitors participated in the program to recycle processing scrap generated on the show floor, twice as many as at NPE2012, causing a dramatic increase in the amount of material collected for recycling,” SPI has announced.

Commercial Plastics Recycling (CPR), the official recycling company for NPE2015, collected, sorted, and recycled 191 tons of processing scrap, which was 62% more than was collected at NPE2012 and 235% more than at NPE2009. “We reached out to exhibitors well in advance of NPE2015 to find out their needs and get a clear idea of how we should prepare,” said Paul Benvenuti of CPR. “Another big help was having our containers and trucks on site during setup since machines were being operated and generating scrap well before the start of the show.”

Altogether, NPE2015 generated 518 tons of waste at the Orange County Convention Center in Orlando, Fla., including both processing scrap and post-consumer waste. Of the total, 452 tons, or 87%, was recycled. CPR reclaimed the processing scrap at its recycling facility in Tampa, and through a contract carrier, the Orange County Convention Center arranged for recycling of post-consumer waste.

“SPI and the plastics industry’s commitment to reduce, reuse, or recycle was a significant focus of the show, and we believe our recycling efforts were a realization of that commitment,” said Bill Carteaux, SPI’s president and CEO. “As the leading trade event in plastics, we needed to model the appropriate behavior, and thanks to the efforts of our recycling program partners, we were able to do just that.” 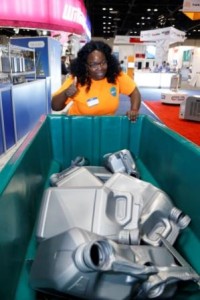