The hub will be located in the city of Odense, the heart of Denmark’s rapidly expanding robotics cluster. 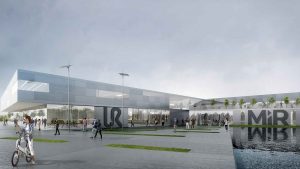 An artist’s rendering of the new cobot hub. The final design has not been finalized. Photo Credit: Teradyne

Danish robotics companies Universal Robots (UR) and Mobile Industrial Robots (MiR) are investing US$36 million to build a new hub to make collaborative robots – or cobots – in the city of Odense, the heart of Denmark’s rapidly expanding robotics cluster.

With financial backing from their joint U.S. parent company Teradyne, UR and MiR have acquired a 50,000-square-meter building site in Odense to house what’s being called a major cobot hub.

“MiR and UR are leading the world in the collaborative robot revolution that’s making automation solutions available to companies of all sizes,” Mark Jagiela, president and CEO of Teradyne, said in a press release. “Teradyne continues to invest aggressively in the development of new products, solutions, and sales channels and this new facility is a key part of our growth strategy. We have found something very special in Denmark. The Danes’ combination of innovative industrial design, combined with a practical business sense, have created a perfect combination for this emerging industry.”

Cobots are a type of user-friendly robots that can work closely with humans without the need for safety guarding, enhancing both work environment and productivity.

The building site is in Odense’s industrial district close to UR’s current headquarters, which will also become part of the new cobot hub. “The two companies will continue as separate entities with the aim to create an attractive environment that will help attract new employees to facilitate the continued growth expected by the two companies in the coming years,” the press release added.

UR and MiR also opened a cobot hub in Barcelona, Spain in November 2019 to promote collaborative automation in Southern Europe. The 1,500-square-meter facility in Barcelona includes offices for each company, as well as a joint technology showroom.

Testifying to the strength of the expanding market for cobots, MiR has hired 100 employees within the past year, with UR adding 280 staff members during the past two years. Today, the two companies have 160 and 450 employees, respectively, based in Denmark. UR employs almost 700 employees worldwide while MiR’s staff counts a total of around 220 globally.