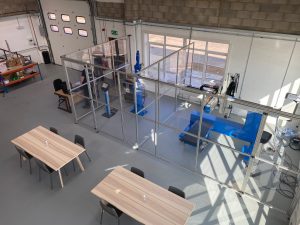 Sepro UK, a daughter company of French robot maker Sepro Group, celebrates its 30th anniversary this month with the opening of an expanded sales and service centre in Milton Keynes, Buckinghamshire.

Founded in 1991 as one of the first wholly-owned subsidiaries of Sepro Group, La Roche-sur-Yon, France, Sepro UK supplies three- and five-axis Cartesian beam robots, and six-axis articulated-arm robots, as well as automation systems. Its customers include injection molders that serve medical, housewares, construction materials and other markets throughout the United Kingdom. The Sepro UK staff numbers nine overall, including a technical service supervisor and three service engineers.