The France-based robotic automation maker is also integrating its Mexican operations more closely with its recently expanded North American hub in the U.S.

France-based robotic automation maker Sepro has expanded its sales and service operations in Mexico, doubling the size of its local technical service staff to nine since January, adding a new member to its senior management team, and moving toward closer integration with Sepro’s recently expanded North American “hub” in the U.S. 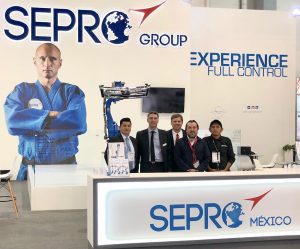 Sepro Mexico’s latest moves were announced by Raul Scheller, managing director of Sepro operations in North America. “We are excited to announce that Ulises Romero is joining Sepro Mexico as sales area manager, where he will work side-by-side with Xavier Espaullard, sales director of Sepro Mexico, to serve our customers and support our sales and service representatives throughout the country,” Scheller said in a statement. “We appreciate Ulises’ experience in injection molding and look forward to his help in growing our Mexico business.”

Romero’s appointment is the latest in a series of changes taking place in the Sepro Mexico organization. The most recent changes occurred in early 2019, when Sepro Mexico doubled the size of its sales and engineering service team from four members to nine. The team’s field service and support efforts throughout Mexico are augmented by the staff of Axiomatek, a service contractor based in Monterrey.

Sepro Mexico is also being closely integrated with the larger Sepro North America organization, Scheller said. “Integrating Sepro Mexico’s local people and operations with Sepro’s growing North American hub is critical to delivering outstanding service to customers in Mexico, and seamlessly integrated service to companies that operate on both sides of the border,” he said.