Sepro expands it footprint in India with new distribution pact

The France-based robotic automation maker has signed a distribution contract under which Labotek A/S, Frederikssund, Denmark, will sell Sepro robots in India. 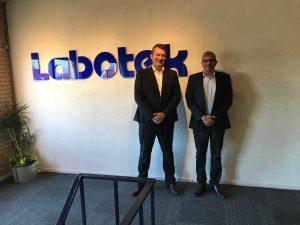 Sepro has signed a distribution contract under which Labotek A/S, Frederikssund, Denmark, will sell Sepro robots in India. In a statement, Sepro officials said the agreement is designed to develop the commercial presence of Sepro Group in India, while expanding Labotek’s portfolio of auxiliary equipment for plastics processing.

The contract signing, which took place remotely due to the coronavirus situation, was completed on April 14.

Robots will be sold under the Sepro brand name by Labotek Plastics Auxiliaries India Pvt. Ltd., the local sister concern of Labotek A/S headquartered in Pune, Maharashtra. Commissioning and service of Sepro robots in India will be handled by Labotek technicians who will be trained at the Sepro factory in France. Labotek maintains a showroom in Pune where robots can be demonstrated and where user training will take place.

“Sepro is serious about growing our business in Asia as part of our strategy to become the world leader in robots for injection molding,” said Xavier Lucas, Sepro’s chief sales officer. “Until now, Sepro has been mainly present on the Indian subcontinent through its large, multinational customers but the distribution agreement with Labotek will give our products much broader exposure.

The market for injection molding machines in India has grown by more than 17 per cent in the last three years, Sepro officials said, with the primary markets being automotive, infrastructure, household goods, agro-food, and health and packaging.