Statistics from the Robotic Industries Association report a 1.6 per cent increase compared to 2018. 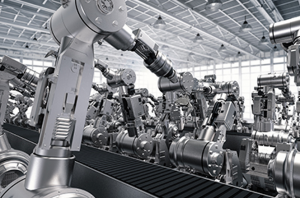 North American robot orders inched up in 2019 compared to 2018, a new report says, due in large part to a 50.5 per cent increase in orders from automotive OEMs.

The largest driver of the growth was a 50.5 per cent increase in orders from automotive OEMs and a 16.6 per cent increase from the plastics and rubber industry, the report said. “Orders to automotive component markets were down 6.6 per cent, and all other non-automotive industries, including food & consumer goods, life sciences, metals, and semiconductor/electronics, contracted by single digits in comparison to last year,” RIA said.

“While 2019 was a challenging year, and the outlook for growth in 2020 is murky, we’re still seeing growing interest in automation technologies and solutions that will lead to continued future growth,” said RIA president Jeff Burnstein.

The RIA is headquartered in Ann Arbor, Mich. The association is also part of A3, an umbrella group for RIA, AIA – Advancing Vision + Imaging, Motion Control & Motor Association (MCMA), and A3 Mexico.