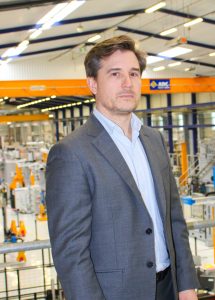 He replaces Jean-Michel Renaudeau, who left the company in June 2019.

“We took our time in finding our new CEO,” Eric Radat, president of Sepro Group, said in a Feb. 1 news release. “But in Charles de Forges, we have found the right person to help guide Sepro into the future.”

De Forges has almost 20 years of experience in senior management roles at business-to-business companies. He has a graduate degree in Mechanical Engineering, and previously worked in industry in sectors such as packaging, luxury, cosmetics, automotive and aerospace and has worked internationally in Europe, the U.S., and Brazil.

“Sepro is a fantastic example of a family owned company, proud of its regional roots while being a world leader in robots and automation,” de Forges said. “I am very happy to join a company full of exciting projects, along with a dynamic and ambitious team. I am looking forward to taking part in the future of this company and to make it grow even further as a robotics leader.”