A new enzyme is able to effectively break down PET, one of the most popular forms of plastic employed by the food and drinks industry.

It sounds like a rejected plotline for a Godzilla movie: Just two years ago, researchers stumbled across a mutant plastic-eating bacteria that had evolved in a Japanese trash dump.

But instead of terrorizing entire cities, this bacteria might actually have a positive impact: British scientists are now hoping that an enzyme derived from it will revolutionize recycling and prevent thousands of tons of non-biodegradable waste from clogging up landfill sites and the world’s oceans.

The enzyme was created by researchers from Portsmouth University who were conducting tests on the naturally occurring bacteria found in Japan; when they bombarded it with X-rays, they caused it to mutate into something even more powerful. Called Ideonella sakaiensis 201-F6, this new enzyme is able to effectively break down polyethylene terephthalate (PET), one of the most popular forms of plastic employed by the food and drinks industry. Bottles made from PET are used to package 70 per cent of soft drinks, fruit juices and mineral waters sold in shops and supermarkets; and while often described by industry as highly recyclable, discarded PET actually persists for hundreds of years in the environment before it degrades, and represents a large percentage of the millions of tonnes of plastic that enters the world’s oceans each year. 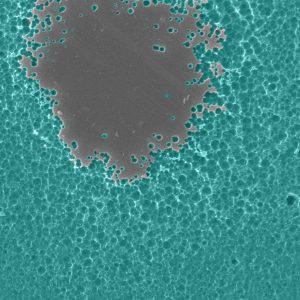 The enzyme is the first known protein capable of digesting PET.

“Serendipity often plays a significant role in fundamental scientific research and our discovery here is no exception,” said lead scientist Professor John McGeehan, from the University of Portsmouth. “Although the improvement is modest, this unanticipated discovery suggests that there is room to further improve these enzymes, moving us closer to a recycling solution for the ever-growing mountain of discarded plastics.”

Significantly, the enzyme can also degrade polyethylene furandicarboxylate, or PEF, a bio-based substitute for PET plastics that is often used as a replacement for glass beer bottles. “The engineering process is much the same as for enzymes currently being used in bio-washing detergents and in the manufacture of biofuels,” McGeehan said. “The technology exists and it’s well within the possibility that in the coming years we will see an industrially viable process to turn PET and potentially other substrates like PEF, PLA, and PBS, back into their original building blocks so that they can be sustainably recycled.”